RIBA criticises Approved Document B in response to consultation 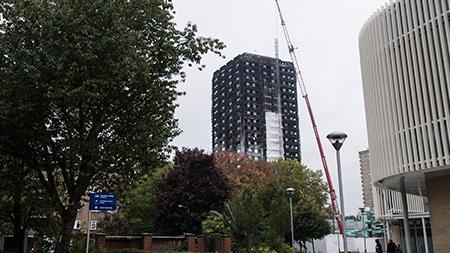 Responding to the government's call for evidence on its review of building regulations for fire safety in England, the architects' body expressed concern that the technical guidance in Approved Document B assumes that measures to prevent a fire spreading will be 100% effective and the "stay put" policy can be relied on.

"As the Grenfell Tower tragedy illustrates, if a fire spreads rapidly, a reliance on the 'stay put' policy can be devastating", it said.

The stay put policy meant that residents of Grenfell Tower waited in their flats as a fire spread throughout the north Kensington block on 14 June 2017, killing 72 people.

The inquiry found that the compartmentation system that should have contained the fire failed and flames spread through cladding on the outside of the building.

RIBA has called for at least two staircases to be built in all new multiple occupancy residential buildings, where the top floor is more than 11 m high. Alternative means of escape are already required in offices and hotels and are being introduced in Scotland.

The architects' body said in its response: "For too long the government and the construction industry have relied on building design and construction that meets the regulatory requirements to resist the spread of fire (internal linings, internal structure and external structure), while the requirements for means of warning and escape and access and facilities for the fire service have been increasingly deprioritised in technical guidance over decades."

RIBA has also said the government should prioritise the introduction of centrally addressable fire alarms, and a requirement for sprinklers in all new and converted residential buildings. Existing buildings taller than 18 m should also be retro-fitted with sprinklers.

However, it notes that "sprinklers should not be used as a means to compensate other key fire safety measures", such as the removal of self-closing devices to fire doors.

Jane Duncan, chair of the Expert Advisory Group on Fire Safety, said: "We simply cannot allow buildings to continue to be built to regulations and guidance that everyone, including the government, acknowledges are deeply flawed.

"Twenty months on from the Grenfell Tower tragedy, to continue with more consultation but not enough action fails the public and does not honour the victims.

"All residents should have the right to the added protection offered by sprinkler systems, to know if a fire breaks out in their building, and to be safely evacuated if necessary. This means the guidance must change to ensure a better warning system and an alternative means of escape."

Separately, criminal charges in relation to the fire are unlikely to be brought for at least another two years, the Metropolitan Police said in a statement.

Detective superintendent Matt Bonner said: "We have always said our investigation will be thorough, exploring all reasonable lines of enquiry and examining all the available evidence.

"While the Grenfell Tower Inquiry and the police investigation are independent of each other, our timelines are inextricably linked. For our investigation to be considered thorough and complete, it must consider all relevant information and it would be wrong not to take into account evidence given to the public inquiry and its final report and findings.

"We are in regular contact with the bereaved families and survivors as well as the wider community and have informed them of our projected timeline for the investigation. I know this is longer than some might have anticipated, but the police must ensure all the available evidence is considered before any file is submitted to the CPS."