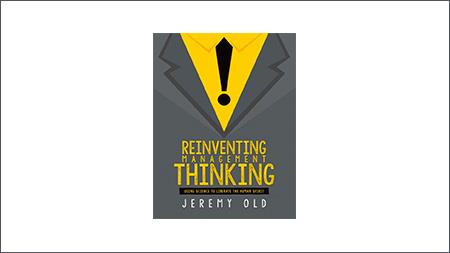 In this book, the main theme of which is that stress makes our managers and organisations dysfunctional, psychotherapist and change consultant Jeremy Old sheds much new light on the fight/flight model, showing that it drives inappropriately polarised views of business problems, creating a mentality in which a quick decision is more important than the right one, ramping up the stress for all involved.

It is subtitled "Using science to liberate the human spirit" and is split into two main parts: in the first section ("the amygdala effect") Old sets the scene while in the second ("releasing the handbrake") he explores 30 stress factors, analysing how they cause stress and suggesting remedies. His central thesis is that people naturally innovate, solve problems and collaborate to ensure the success of their team or unit, but so much that passes for "management" works directly against those most helpful skills. He argues that when people are blocked from exercising their innate abilities -- by daft targets imposed without consultation, conflicting priorities, and rules that demean people by taking away any individual discretion -- the result is heartache, poor performance and yet more stress.

Old covers a broad spectrum of corporate situations, including small owner-managed businesses, national building societies and large public bodies such as the National Health Service. The book's large format and the use of tables and diagrams to break up the text makes it highly readable. There are also many in-depth case studies which bring home the realities of the corporate blunders he rightly criticises.

I lost my way in the treatment of the 30 stressors, especially as this gets a bit repetitive. Old uses a decimal (4.1 and so on) paragraph system but not all the time and further confusion is added by numbered lists within numbered paragraphs, so you may end up flicking backwards and forwards so much that you lose the thread of the argument.

The book generally offers twice as much material on understanding a problem as on solving it, and while Old does offer "remedies", they often left me thinking there was much more to be said on solutions. This is a tour de force, there's no doubt, but some professional help with the editing would have created a book that was kinder to the reader. If you want a book that gives a unique, almost evangelical, perspective on where so many managers go wrong in motivating their teams, this is a most stimulating read. It's also exceptionally good value.