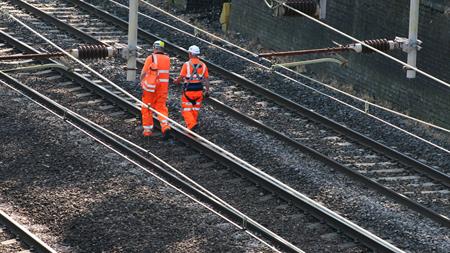 In its Annual Health and Safety Report of Performance on Britain's Railways, published last week, the ORR has raised concerns over Network Rail's risk management strategies.

"The lack of improvement in Network Rail's risk management maturity, allied with the stalled improvements in performance indicators, give the strongest illustration yet of the potential vulnerability of its safety management record of recent years", the report says. "ORR will continue working to secure targeted improvements, particularly in assurance activities, in order to promote more reliable and sustainable risk control."

One worker was killed during the 12-month period, compared with zero deaths the previous year. A Network Rail construction manager died in a car crash in June 2016 as he drove to work.

The latest figures show that incidents reported under the Reporting of Injuries, Diseases and Dangerous Occurrences Regulations 2013 (RIDDOR) increased to 90 in 2016/17 from 72 in the previous 12 months. Major injuries to infrastructure workers on running lines rose 21% to 72, half of which involved slips, trips and falls.

The rail operator missed its lost-time injury frequency rate (LTIFR) target of 0.447, the report says, though it ended the year with its best ever rate of 0.450.

Of the 16 improvement notices served by the ORR in 2016/17, nine were handed to Network Rail over failures relating to risk assessments, guarding dangerous parts of machinery, manual handling of liquefied petroleum gas canisters, and hand-arm vibration syndrome (HAVS).

One hundred health cases were reported to the ORR under RIDDOR in 2016/17, up from 29 in the previous year, with reports for HAVS (85) and carpal tunnel syndrome (12) dominating the figures. Most of the cases were in the mainline railway department (see table).

The report says: "Despite progress in some areas, ORR continues to see a mismatch between the occupational health policies and procedures developed by Network Rail centrally and consistent delivery in the Network Rail routes."

This year Network Rail has been fined £4.87m in prosecutions brought by the ORR. This includes a £4m penalty over a fatality at the Gipsy Lane pedestrian level crossing in August 2011, and an £800,000 fine for an incident in June 2014 when a track worker was struck by a train in Surrey.

In addition, West Coast Railways was ordered to pay £200,000 for an incident in March 2015 when one of its steam locomotives passed a signal at danger at Wootton Bassett junction in Wiltshire, and London Underground (LU) was handed a £500,000 fine after a maintenance worker fell from a tower scaffold while cleaning a former lift shaft.

Britain's railways are among the safest in Europe, the report highlights, with overall mainline passenger and public harm on trains and at stations at one of the lowest levels in the past ten years during 2016/17. In addition, overall harm to workforce is at the second-lowest level over the past decade.

"However," said Ian Prosser, director of railway safety at ORR and chef inspector of railways, "2016/17 has shown a plateauing of performance with positive developments taking place against a backdrop of incidents and accidents which show that the industry is still some distance from excellence."