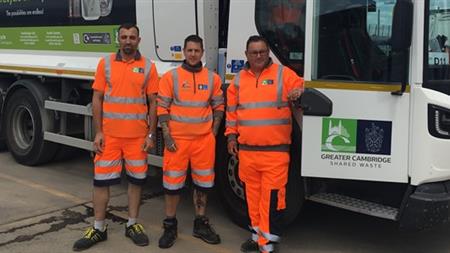 Residents have been urged to help with the pilot by making sure glass is kept inside their recycling bins only and not put in additional clear sacks.

The idea is that the improved wellbeing and comfort of staff will help to minimise the risk of accidents.

Last year saw one of the hottest summers on record, with temperatures regularly peaking over 30 degrees. During the summer months, Cambridge City and South Cambridgeshire District, which are part of Greater Cambridge Shared Waste Service, and Huntingdonshire District Council, provided crews with water and sunscreen.

The Greater Cambridge Shared Waste Service has more than 150 frontline bin collection staff, with each crew emptying up to 1,300 bins during a typical day. Refuse loaders, who can walk the equivalent of almost half a marathon during every shift, requested that they be able to trial wearing shorts.

The pilot's outcome will be evaluated before any permanent arrangements are discussed or put in place.