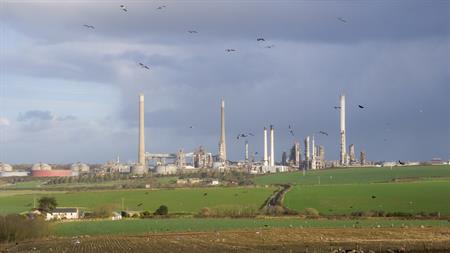 David Thomas was using the walkway to access an oil tanker on 5 March 2012 when it suddenly gave way. He fell 3.5 m over the side and his legs became tangled in loose cables. He sustained fractures to both legs and a dislocated knee.

The Health and Safety Executive (HSE) told Swansea Crown Court that Valero had not carried out a sufficient risk assessment for the use of the access tower, with the result that the dangers of slack cables were not identified.

Staff had not been trained how to safely use and operate the access tower. The company had not installed measures to prevent or detect loose cable in the mechanism and said it was unaware that the access tower was not CE marked.

The HSE also found other failings at the refinery in Rhoscrowther during its investigation, including a failure to adequately investigate accidents that happened in August 2010, February 2011 and September 2011. The company did not review its risk assessments after these incidents.

A maintenance firm employed by Valero had raised concerns about the lack of an access gate interlock and warned of a "potential fatal accident waiting to happen". The executive said the company did not act on these recommendations.

Valero Energy UK pleaded guilty to breaching Section 2(1) of the Health and Safety at Work Act at a previous hearing. It was fined £400,000 and ordered to pay costs of £60,614.

Judge Peter Heywood said while the equipment had design flaws, Valero had failed to act after a series of accidents and the "strident" warning from the maintenance company had proved to be true, the BBC reported.

After the hearing, HSE inspector Andrew Knowles said: "It was particularly disappointing to find that, although the company knew there had been problems with the operation of the access tower, it had failed to investigate these properly and had relied on changes to instructions, rather than taking action to modify the defective hardware, as required by the hierarchy of risk control.

"This was even more surprising in view of the fact that the company operates a major hazard refinery site where you would expect such problems to be taken more seriously and effectively investigated, with suitable corrective actions implemented."