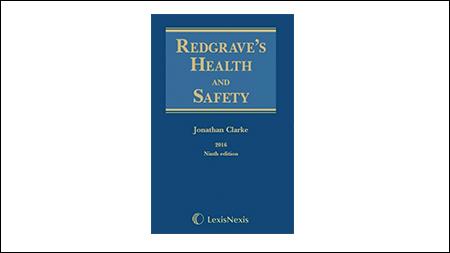 Following the style and structure conventions of most legal books, it begins with lists of laws. The first 80 pages comprise tables of the key acts, regulations and EU law as well as an alphabetical index of cases.

The main content is divided into 14 chapters. The first summarises how OSH law has developed over the years, then comes an explanation of general principles, looking at both civil and criminal law and offering a guide to common expressions such as "reasonably practicable", "adequate" and "suitable". Next comes Legislation of General Application, covering the Health and Safety at Work Act 1974 and other law that is likely to apply to UK dutyholders, regardless of what sector they are in.

The next four chapters cover some of the most important workplace hazards, including machinery, manual handling, hazardous substances, noise, radiation and the workplace environment generally. The focus then shifts to activities: chapter nine covers construction, ten transport, 11 agriculture and 12 offshore topics such as pipelines and diving. The concluding chapters discuss working time and the linked issue of industrial relations. The law is stated as of 1 September 2016 so all new legislation up to that date is included.

The hardback and ebook prices are identical. At first sight this seems steep. But the ebook has two great advantages: one, it's accessible via phone or tablet, so is much more portable. The text is also searchable so that you can quickly find the references relevant to your query.

So, it's not cheap, it's not light and it's not easy reading for the layperson. With the toolkits that are now available on the Health and Safety Executive's website, this would not be the first reference I would turn to if I were advising the directors of a new company. Most of the UK statutory requirements covered here can be downloaded free at www.legislation.gov.uk and the editors know no more than the rest of us how the law will be changed by Brexit ("time will tell", they say).

But for the complete text of acts and regulations, with expert commentary on the state of the law in the light of the courts' decisions, Redgrave's has no parallel. If your firm finds itself in court on a health and safety issue, you'll almost certainly spot a copy on both the prosecution and defence tables.