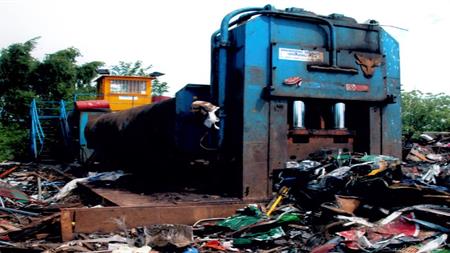 "Companies supplying scrap get paid according to its weight," Storer said. "Gas cylinders are put in, as they said in court, by unscrupulous companies because it makes the scrap heavier so they get paid more for it. It's a known hazard within that particularly industry."

On 16 June 2009 a grab picked up the water tank (and the obscured gas cylinder) and put it into a Taurus box shear to be chopped down into smaller pieces ready for onward processing. As the gas cylinder was processed in the shear, it exploded.

A large section of the cylinder (about half of it) flew out of the machine and struck 55-year-old employee Tony Johnson in the face, leaving him with significant head injuries. He was taken to hospital but died shortly afterwards. After striking Johnson, the piece of metal ricocheted off a forklift truck and hit a HGV that was delivering a load of scrap at the time.

"There were other people in the area and that's why there were two breaches of the Health and Safety at Work (HSW) Act," said Storer. "Luckily it didn't hit any of the other workers." Walter Heselwood pleaded guilty to breaching Sections 2(1) and 3(1) of the HSW Act at Sheffield Crown Court. It was fined £120,000 with £40,000 costs.

In its Orphaned gas cylinders in the waste and recycling industries guide, the HSE says cylinders are commonly discarded if they are "too troublesome to return", "ended their normal or useful life" or "damaged and therefore not returnable to the supplier".

During its investigation the HSE found there were sorting procedures in place at the site, though they weren't documented. A risk assessment had not been carried out for processing different types of scrap metal. Had there been one, Walter Heselwood would have identified the need for a precautionary measure such as a blast wall around the shearing machine or a pit.

Storer said the judge took the view that it was foreseeable that a gas cylinder could be concealed in the waste stream.

The guard that should have been attached to the end of the machine's discharge chute where processed metal was pushed out was not in place when the incident happened because it broke repeatedly. "I can't say exactly when it was removed but it wasn't a few weeks or months ago, it was a long, long time," Storer said.

Following the event, Walter Heselwood modified the design of the guard on the discharge chute - it is now hinged to reduce the likelihood of it unhooking or breaking - and erected a blast wall around the discharge area of the box shear.

The company enlisted the help of a consultant who put together a safe working procedure for sorting the waste and all sorting procedures are now documented. Toolbox talks were held to brief all employees on the procedures if they find a gas cylinder.