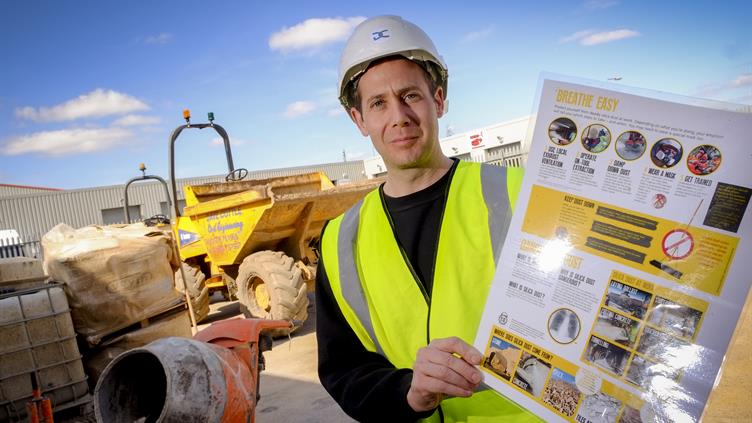 More than 10,000 downloads of the campaign's free resources were made from www.notimetolose.org.uk in March -- the highest amount for a single month since its launch in 2014.

The majority of downloads were made by people accessing the new materials around respirable crystalline silica (RCS) which IOSH launched in mid-March.

Among those to have downloaded the information on RCS exposure is Steve Chilvers, who used a novel way of sharing the details with the workforce at Wrexham-based Dave Cottle Civil Engineering Ltd.

He attached copies of the resources to the weekly payslips of the family-run firm's 40-strong workforce, and has also spoken face-to-face with workers about the issue through his role as the company's health and safety coordinator.

Steve, who is an affiliate member of IOSH and an active member of the institution's North Wales Branch, said: "As a former site foreman and someone who has spent 15 years working on-site in construction, I thought there must be a better way of sharing the message than just putting a poster up on the wall in our site offices.

"Everyone automatically opens and reads their weekly payslip so I attached the information to it and had a chat with them in person to explain more about the issue at hand. I was able to point out that instead of being a hindrance to their work, precautions such as dust masks are there to save their lives."

The company uses dust masks to protect workers from being exposed to RCS as a "last resort", Steve said, with its main focus being to eliminate or reduce the dust risk by using water suppression techniques and providing workers with high-quality equipment.

His ability to get buy-in from workers at site-level has been made easier by the importance that the directors of the family-run firm place on safety and health themselves, Steve added.

"There has been a huge input from director-level when it comes to promoting workplace safety and health," he said.

"The directors, like me, want to make sure workers are looked after and go home in the same condition as they came in at the start of the day."

Silica dust is one of five common agents associated with work-related cancer registrations and deaths in the UK that the institution is highlighting through its No Time to Lose campaign.

Asbestos, diesel engine exhaust fumes, solar radiation and shift work are also being covered as part of the campaign, which aims to get work-related cancer more widely understood and help businesses take action.

The record-level of interest in the campaign's resources last month means the overall number of material downloads made since the launch of No Time to Lose now exceeds 40,000.

Shelley Frost, executive director of policy at IOSH, said: "We are delighted that the No Time to Lose campaign continues to go from strength to strength. Our members across the world are playing a vital role in that success.

"Innovative ideas like Steve's are a great example of how OSH professionals can share the campaign's important messages with the wider workforce.

"We hope that businesses follow the likes of Dave Cottle Civil Engineering Ltd by recognising that promoting workplace safety and health is not only good for the worker, but also for the company's productivity and performance."

Follow @_NTTL on Twitter or visit www.notimetolose.org.uk for the latest news and information around IOSH's No Time to Lose campaign.