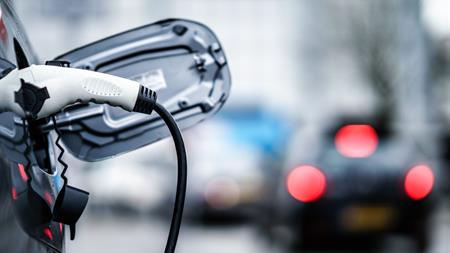 It is hoped the new law will improve safety for other road users and visually impaired pedestrians should they not hear the quiet vehicles approaching.
The acoustic vehicle alert system (AVAS) emits a similar sound to that made by a conventional engine.
The noise must be generated when the vehicle is reversing or travelling at less than 20 km/h. However, the driver can deactivate the system temporarily.
Electric and hybrid vehicles such as the Toyota Prius, which is often used by taxi firms and Uber drivers, make little noise.
According to research from the charity Guide Dogs, pedestrians in the UK are 40% more likely to be hit by a hybrid or electric car than by one with a petrol or diesel engine.
Road minister Michael Ellis said: "The government wants the benefits of green transport to be felt by everyone and understands the concerns of the visually impaired about the possible hazards posed by quiet electric vehicles.
"This new requirement will give pedestrians added confidence when crossing the road."
Although Hugh Huddy, policy manager at the Royal National Institute of Blind People (RNIB), welcomed the new regulations "after years of campaigning on this issue", he had reservations. He said: "It will take time for the new AVAS to apply to electric cars everywhere and we remain concerned that existing cars on the roads won't be fitted with this essential safety feature for years -- creating a discrepancy in safety standards on Britain's roads until 2021."
Topics:
Road safety
Sector: Central government
Transport and logistics
News