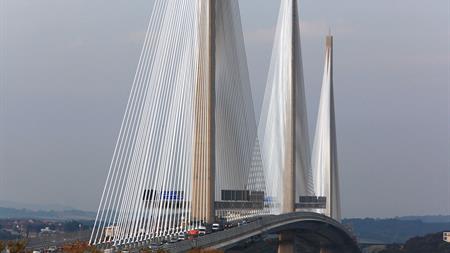 The slinger, named as Desmond Flett, had all five toes on his left foot amputated after a crane mat fell on him at a storage facility at Rosyth Dockyard, Fife.

Forth Crossing Bridge Constructors (FCBC) admitted breaching reg 8 of the Lifting Operations and Lifting Equipment Regulations and was fined £10,000 at Dunfermline Sheriff Court.

The court was told that Flett was helping a telehandler operator manoeuvre the steel mat on 11 April 2015. But the slings used were unsuitable and the load fell and flattened the steel toe cap of his boot.

The prosecution was brought by the Health and Safety Executive (HSE) after it found FCBC had not developed a safe plan of work for the lift. The company admitted failing to appropriately supervise the lift and ensure it was carried out safely with suitable equipment.

In addition, the telehandler driver's plant operator ticket had expired, and he was not qualified to carry out the job, local media reported.

Defending, Katherine Metcalfe said FCBC, which had leased the area within Rosyth Dockyard, had quickly tried to move two crane mats because they were blocking access for a scheduled delivery.

The HSE described the work as "a complex and non-routine lifting operation". It said the reach distances of the chains were too short for the distance between the lifting points on the crane mat.

Flett has been unable to find work since the accident. He still takes pain medication and may need skin grafts in the future.

FCBC is a joint venture between Hochtief, American Bridge, Dragados and Morrison that was contracted by Transport Scotland to construct the Queenferry Crossing between 2011 and 2017.