Qatar Rail: The heat is on 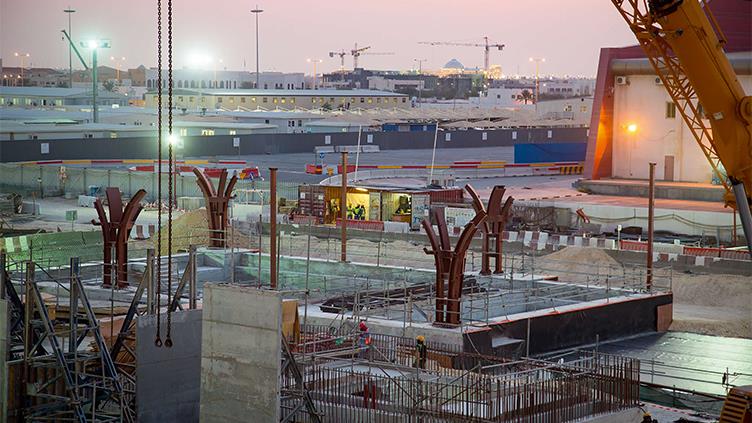 June, July and August are sweltering months in the State of Qatar; daytime temperatures reach the mid-forties Celsius. For the hundreds of thousands of migrant workers on construction sites across its capital Doha, the extreme heat and humidity are major occupational health risks.

To minimise the risk of heat syndrome, the Ministry of Administrative Development, Labour and Social Affairs enforces a government decree requiring all construction firms to observe summer working hours. From 15 June to 31 August, workers in direct sunlight must stand down between 11am and 3pm, the peak hours of sun exposure.

For Qatar Rail, the government body established by emiri decree to design, develop and operate the country's first metro and light rail tram system, the restricted work hours present a challenge as the 2020 deadline looms for the project's first phase completion.

For Qatar, the metro is unprecedented in its scale. Since its inception in 2013, 111 km of tunnels have been driven, with 21 tunnel boring machines (TBMs) operating at the September 2015 peak. If that wasn't enough, the project involves simultaneous construction of the 33 km Lusail Light Rail Transit network. Construction on Lusail started in March 2009 and, although most of the project has been completed, its fourth (and final) stage also has to meet the 2020 deadline. 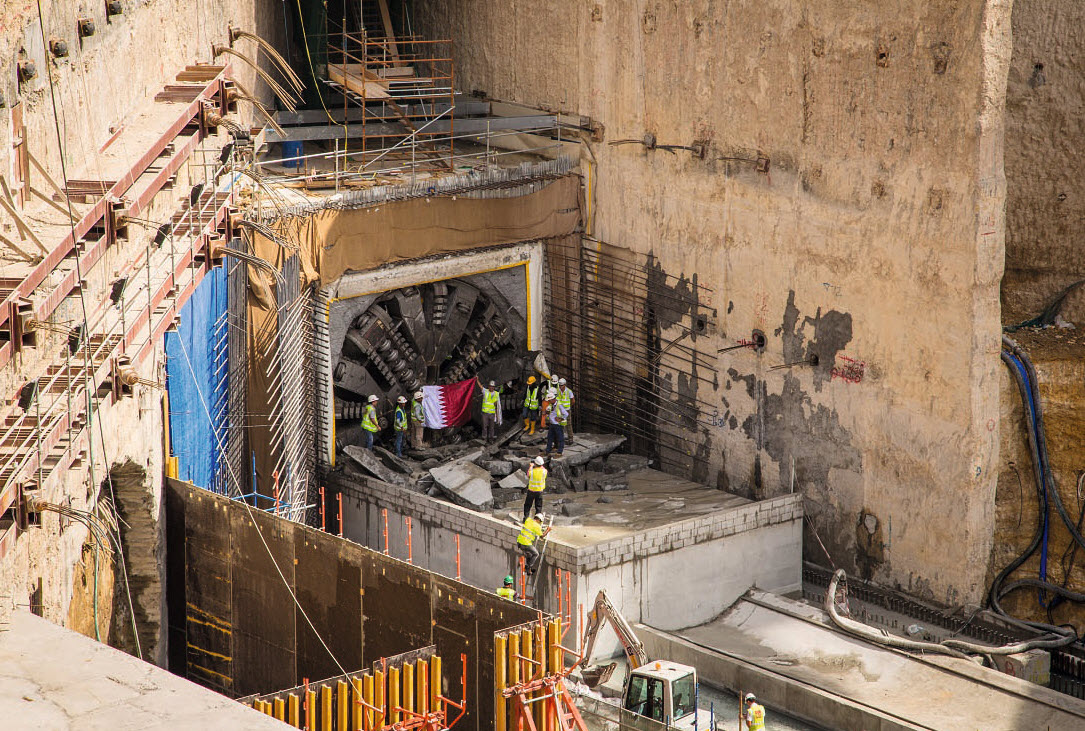 The number of migrant workers employed on the metro has nearly doubled, from 34,000 in the tunnelling stage -- now complete for the first phase's three lines -- to more than 60,000 as construction moves into mechanical and electrical work and fit-outs of the 37 stations.

Beyond complying with the government restrictions, Qatar Rail applies a humidex (humidity index) calculator to identify the danger categories for work in the summer months, so conditions can be monitored and adapted.

A chart used on the construction sites shows the effect of the heat and the humidity and sets out five risk categories from "caution" (30-35°C) to "extreme danger" (50-60°C). For each category, there are recommendations on rest period frequency and duration. 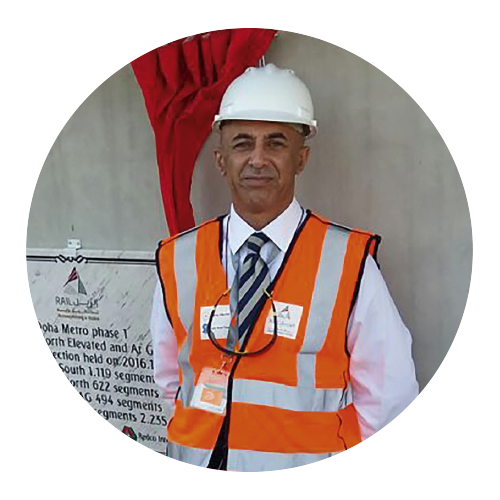 In "extreme danger" conditions, work in direct sunlight is prohibited and workers in the shade must take a 15-minute break every hour. Even work underground, where the humidity can be oppressive, necessitates monitoring and controls.

"We have cold blowers and water stations and workers are encouraged to drink water on a regular basis," says Paul Williams, senior health and safety manager at Qatar Rail.

"They may not feel thirsty, but the time to drink is not when you feel thirsty because then you've already dehydrated, so sometimes we'll say, 'Stop, everyone, and go and get a drink'."

The heat and humidity exposure monitoring is part of Qatar Rail's zero-harm goal, which is embedded in the contracts it awards to joint venture partners and their contractors, and underpins the standards to which it expects them to adhere in the project's delivery. As the legal operator -- in effect the project client -- one of the company's challenges is to oversee contractors, which recruit the migrants, to ensure that worker welfare and OSH standards are maintained.

In a country of around 300,000 native-born Qataris, the Gulf state relies on some two million foreign nationals to fulfil the Qatar National Vision 2030, the country's blueprint for growth. On the Qatar Rail project, the workforce comes from more than 20 countries. Most are from the Indian subcontinent and South-East Asia but Somalians also make up a significant minority.

Before they set foot on site, new arrivals go through risk-based, task-specific training in their own languages. The induction involves a multiple-choice test at the end, which they must pass.

Though site procedures are explained in English, the multinational mix necessitates the joint venture partners and contractors to provide toolbox talks and site briefings in workers' native languages as well. Supervisors, who are recruited to represent each national group, are vital to site risk management. Using simple graphics and aids such as videos, they demonstrate good and poor practice, among them the dangers of not wearing safety goggles and not clipping on harnesses.

In 2016 Qatar Rail opened a training centre that has been accredited by the UK's Chartered Institute of Environmental Health. The centre holds workshops on tunnelling and construction, confined spaces, vehicle and plant movement, work at height and electrical safety. To date, 15,000 workers have been trained.

Supervisors will hand out verbal warnings. If necessary, they can also hand out written warnings and [as a last resort] there are two-day suspensions 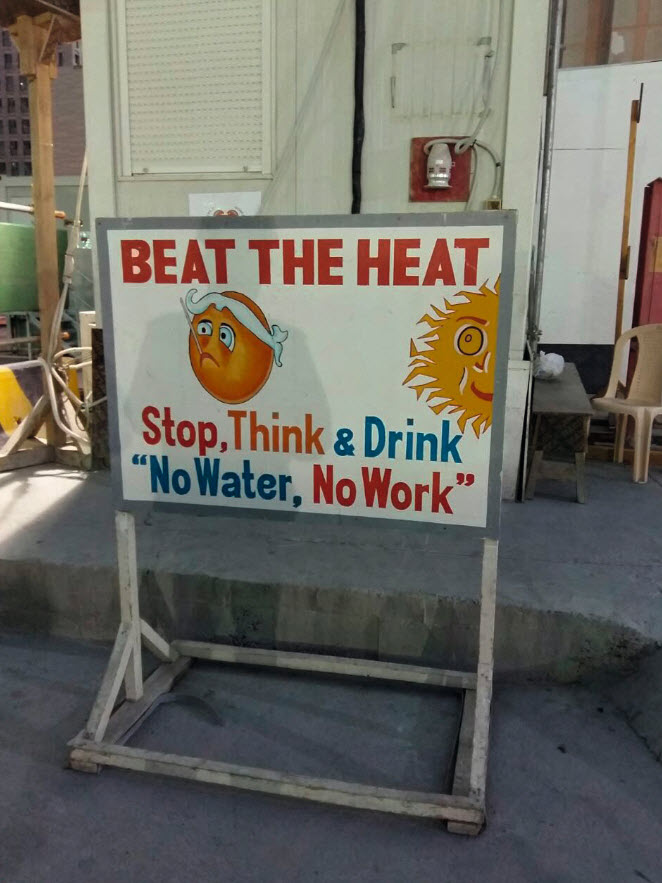 Fostering a more mature safety culture among the workforce has been a challenge since the project's inception. Williams says: "We found that a lot of the supervisors on various sites were not [following best practice]. They were taking safety shortcuts to get work done. They will often come from a culture where health and safety is last on their list [of priorities] but they've been in Doha six months and now we want it to be top. That takes a mindset change."

It is important to win over the supervisors, he adds, because workers tend to follow instructions from the last person in authority they spoke to. Supervisors undertake regular safety training to reinforce their understanding of key risks as the project moves through its construction phases. The trainers aim to give them the confidence to challenge unsafe work.

"We are trying to develop a culture where you have the right and the responsibility to point something out if you think it is inherently unsafe and that does not make you disrespectful," Williams says.

He offers the example of workers using mobile phones on site. Qatar Rail's management team cracks down on this activity through regular publicity campaigns, toolbox talks and a zero-tolerance approach.

"Supervisors will hand out verbal warnings," he says. "If necessary, they can also hand out written warnings and as [a last resort] there are two-day suspensions, which is a loss of salary."

Likewise, there is zero tolerance of violent behaviour, which is a rare occurrence, perhaps because there is only one government-controlled shop that sells alcohol and anyone who wants to buy it needs a permit.

The development shares its most common hazards with any underground rail project: falls from height, falling objects -- a major risk factor once boring is complete and tunnel rings are installed -- electric shocks and entrapment as the electrical cabling installation begins.

When the metro construction started in 2013, Qatar Rail adopted the UK Health and Safety Executive's (HSE) preferred accident frequency rate (AFR) per million hours worked and set an ambitious target of less than 0.1. At IOSH's Middle East conference in April, Williams told delegates that the AFR spiked at 0.072 in July 2014 and had decreased progressively since, although there was a modest rise in November 2016 after a massive influx of construction workers.

"I'd be naturally suspicious if 21,000 workers came in and the AFR was still doing that [plateauing and going down]," he says. 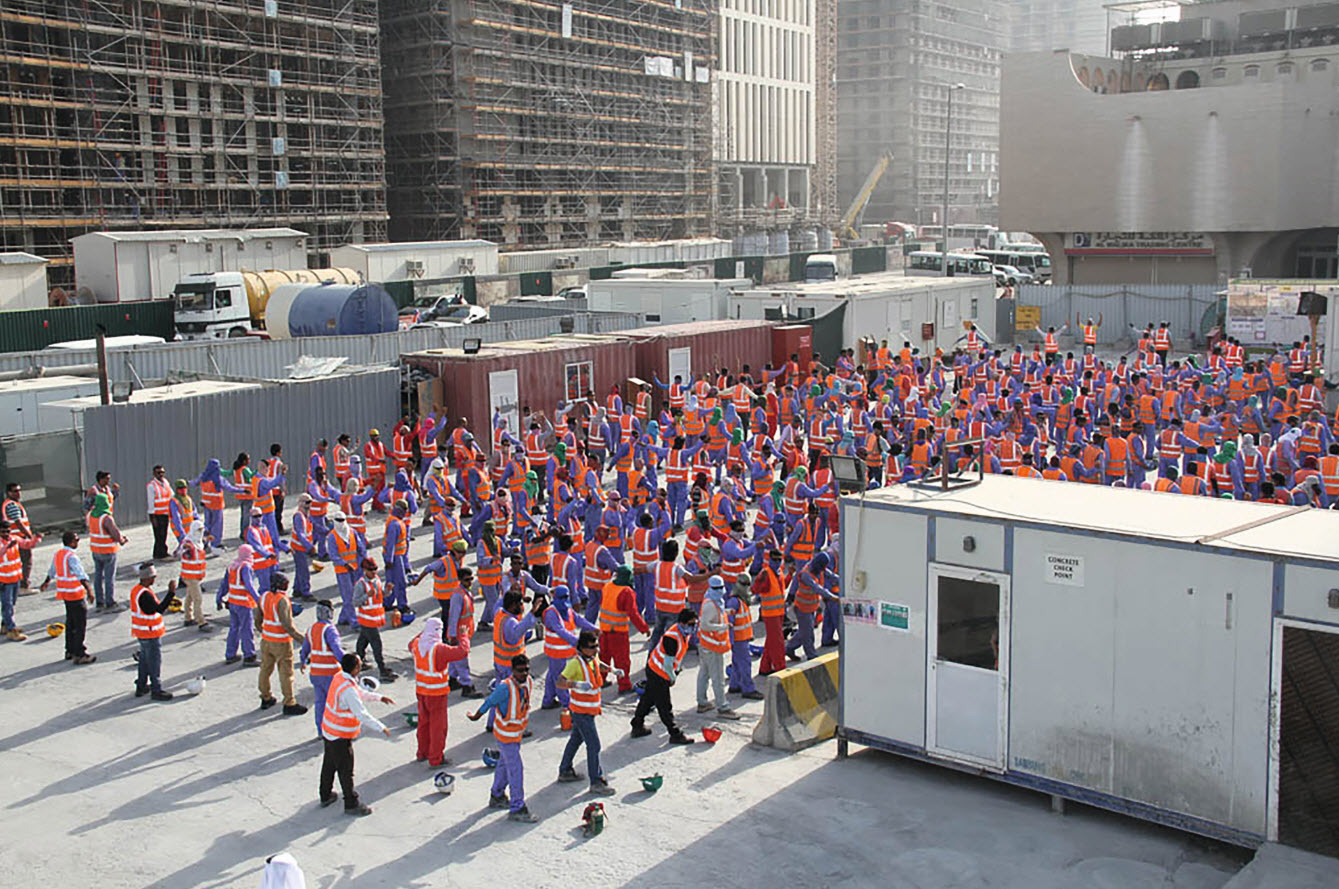 Since project inception more than 300 million hours -- combining work on the metro and the Lusail light rail line -- have been completed. The AFR has declined again and fell to 0.035 in June 2017.

Qatar Rail noticed a spike in hand injuries in early 2016. "Workers had been issued with gloves but weren't wearing them," Williams explains.

It turned out that the individual who had ordered the PPE had sourced over-large European-sized gloves. Workers were collecting hand protection but were not donning it.

"The underlying lesson was, 'You've got to tell us if it doesn't work. It's not being disrespectful'," says Williams.

The management team ramped up leadership tours, which he describes as involving more conversation than inspection, allowing workers to offer constructive feedback. The results have been positive.

In March 2016, five months after Williams took on the senior health and safety manager position, a Filipino contractor died on the project's red line.

"It was an open section at the start of a tunnel section and a lump of concrete came loose," says Williams. "He was on a ladder where it fell, it struck him on the shoulder and he fell off the ladder."

There have been four fatalities since 2011. "We talk about zero harm and that means zero fatalities, zero major injuries and minor injuries -¦ and that is what we will continue to work towards," says Williams.

"We are legally obliged to report any fatalities and major injuries to the [National Committee on Occupational Health and Safety at the] Ministry of Labour and Social Affairs. They will request the investigatory report and are quite forensic."

The ministry, which has a similar role to the UK's HSE, was set up to devise policy and undertake enforcement. "They will do random, unannounced visits to sites and they can ask to see safety records for joint venture packages," says Williams. "They can raise any concerns they have with senior management and can close down a specific activity or even an entire site."

As a former British protectorate, Qatar has adapted strands of UK safety legislation to meet local conditions. Qatar Rail reports accidents under an equivalent of the Reporting of Injuries, Diseases and Dangerous Occurrences Regulation, for example.

As a government body, Qatar Rail has the clout to enforce rules and make sure joint-venture partners and contractors adhere to the zero-harm goal. "We get self-assurance from them on health, safety, environmental and welfare issues," he says. "We can trigger assurance checks if we want."

If Qatar Rail does not like what it finds in the assurance samples, it can, as a last resort, approach the contracts department and have payment withheld.

The stick approach extends to suppliers. "If we find that a company is supplying lifting equipment that is not properly certified, we can suggest to the joint venture partners not to use them. It doesn't take long for that reputation to go around the other government departments," he says.

Williams joined Qatar Rail in October 2015 after being head of safety for Great Western Rail for two years. Like his father before him, he joined the electrical engineering section at what is now Transport for London (TfL). In the late 1990s, he worked in project management on the Jubilee Line extension project and then between 2002 and 2013 held a succession of senior appointments at TfL.

He loves working in the Middle East. He says his working day usually starts at 7am and finishes at 3pm. Beside the heat and humidity, and the working hours that these impose, he has also had to adjust to local regulations governed by religious requirements, which are strictly enforced. The weekend is Friday and Saturday and, because the former is the day of worship, all employers must allow Muslim workers to down tools to answer the five calls to prayer. 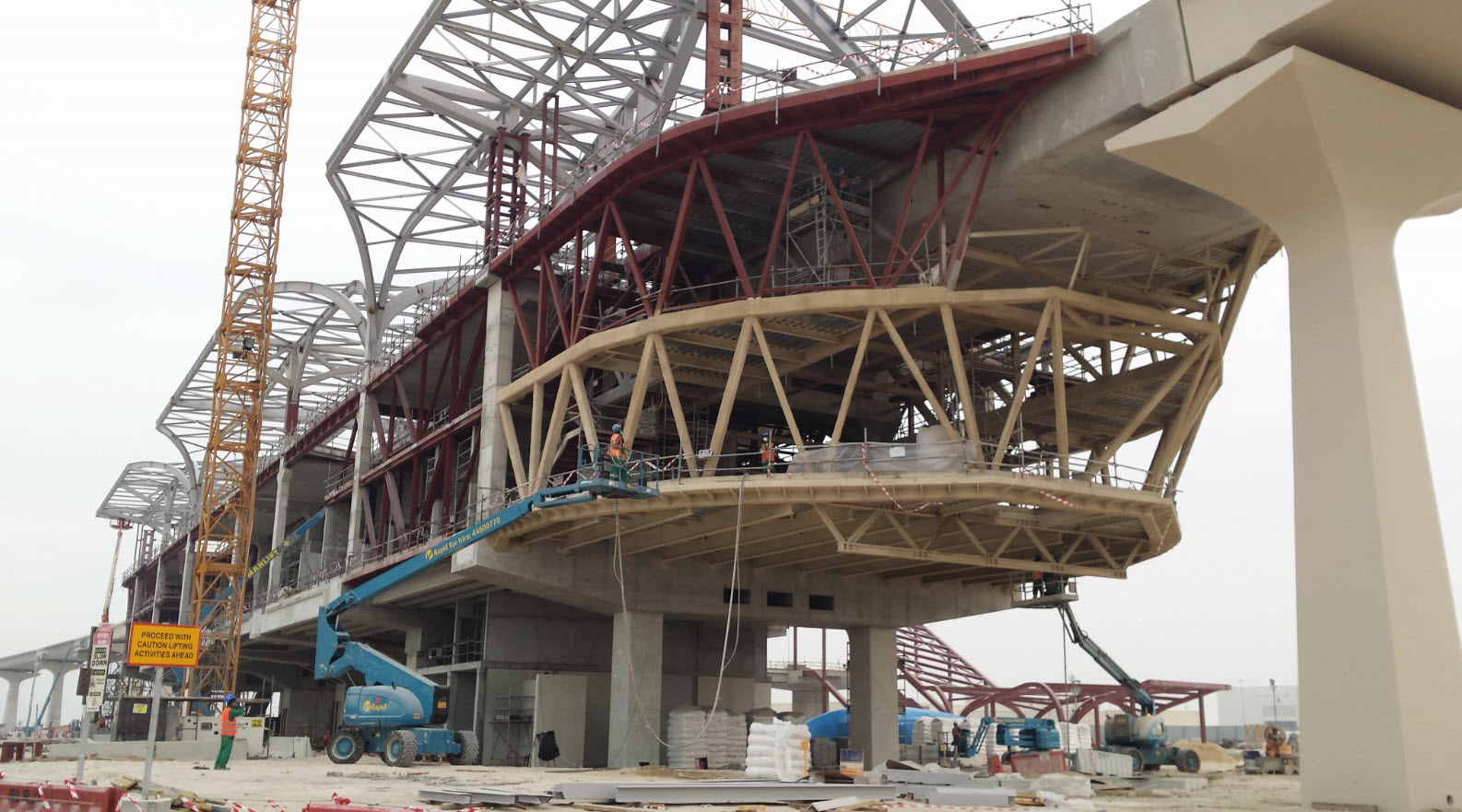 His experience on London Underground has been invaluable. He makes a deliberate point of going out on site to support the night shifts.

"Having done them on the underground for five years, rarely did you see someone in a suit come out," he says. "Personally, I think the night-shift workers are often the forgotten people."

As the Doha project moves into the fit-out phase, Williams says electrical risk and entrapment will become more prominent issues. He also cites fire as a growing risk and will draw on his experience on the Jubilee Line to enforce strict rules.

"The tunnel sections used to be depositories for all sorts of rubbish, so when you got sparks from a train it caught fire," he says. "You really have to be on top of the housekeeping."

Williams reiterates the importance of enforcing zero-harm throughout the supply chain. "As you audit down, you end up with supply chain complexity and you find that [at the very bottom] they've never heard of it," he says.

"Part of our audit regime is to go down and randomly sample that supply chain. 'How do you demonstrate zero harm and do you understand what it means?' It might be that people aren't able to articulate the [zero harm] standard verbatim but I expect them to do the job in a way that is not going to cause harm."