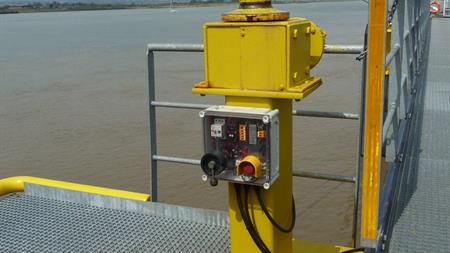 As we reported in January, C.RO Ports landed the fine after a worker's arm became wrapped around a powered capstan as he was mooring a ferry at Purfleet Terminal in Essex. The worker was unable to reach the emergency stop button but his colleague pressed it and the drum ceased turning.

Before the incident, on 6 June 2014, another worker who was also part of a mooring team suffered a near-miss when his glove was caught in a rope as the capstan was turning. He managed to pull his hand free before it was drawn in.

The foot pedal used to control the capstan was on a lead rather than fixed in a position that would prevent the operator from entering the danger zone while the capstan's vertical drum was rotating.

"The key failing was the operators were allowed to decide themselves where they positioned the hold-to-run foot pedal," HSE inspector Glyn Davies told IOSH Magazine. "Ideally the foot pedal should have been fixed so they didn't have an option. In doing that, if the operator had his foot on the pedal he physically wouldn't be able to reach the rotating drum, and if he took his foot off the pedal to move into where the drum was then the drum would stop."

The capstan was one of two that had been recently installed and workers had expressed concerns about some aspects of their design. They were slightly taller than others at Purfleet and could rotate only in one direction, putting operators at risk of becoming entangled in vessels' lines.

Following the incident, Port Skills and Safety (PSS), a joint venture between United Kingdom Major Ports Group and the British Ports Association established in 2002 to improve safety standards in the industry, released an alert about the safe use of powered capstans.

Commenting on PSS's safety alert, Davies said: "There's no doubt that a capstan is a dangerous moving piece of machinery. HSE and the industry accept it's not practicable to put a guard on the rotating drum. The hierarchy of control dictates that if you can't guard it then you need to introduce the next step down in safety measures: stop the movement of the dangerous parts when a person enters the danger zone, or prevent a person from entering the danger zone. That's before you get down to the final level of training and systems of work."

A risk assessment had been carried out for mooring at Purfleet but risks the capstans presented were not thoroughly considered; the hazard of the foot pedal located in the danger zone was not identified, and while the risks from entanglement were recognised, a procedure for mitigating them was not implemented.

When C.RO Ports was sentenced at Basildon Crown Court on 21 January, the judge "found that the risk was foreseeable and the company had actually foreseen it but hadn't really addressed it," said Davies. The inspector said that the judge did also recognise that concerns about the capstan had been raised by employers "but accepted they weren't deliberately ignored by the company - they just weren't escalated through the proper channels".

The size of the fine, according to Davies, reflects C.RO Ports' "comprehensive list of failings. The court recognised the seriousness and the extent of the failings and obviously took that into account", he said. "There was a discussion in court between the defence, prosecution and the judge; everyone was aware that the new sentencing guidelines hadn't come in."

Upon receiving its improvement notice from the HSE, C.RO Ports has risk assessed each capstan and fixed all pedals to the mooring platforms in suitable positions. Danger zones also were painted around each capstan "as a visual indictor for other operators not to enter it while it is rotating", Davies said. "They also issued a safety instruction that when the rope is being applied to the drum, the drum should be isolated and stationary."