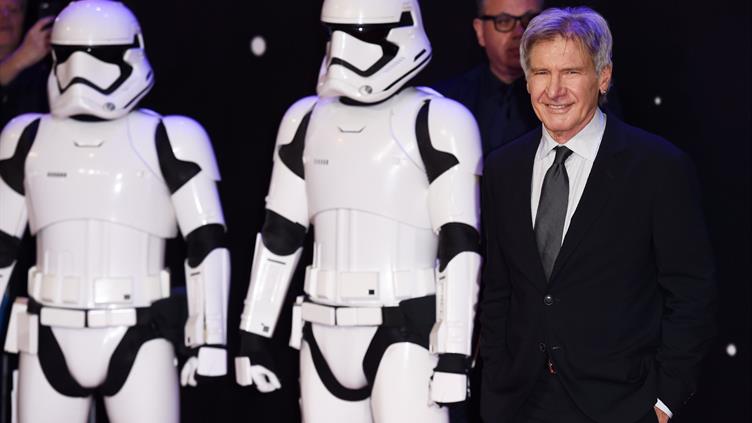 Ford, then 71, was filming Star Wars: the force awakens at Pinewood Studios in Buckinghamshire. He was pinned to the ground by the metal door on 12 June 2014 while on the set of the Millennium Falcon spaceship.

It emerged that only the quick reactions of a prop operator who hit the emergency button prevented a more serious injury.

The Health and Safety Executive (HSE) said previously: "The power of the door's drive system was comparable to the weight of a small car."

Ford was airlifted to hospital with a broken leg and a dislocated ankle. He needed surgery to screw together his fractured tibia and fibula bones in his left leg and plastic surgery on a deep hand wound.

At Aylesbury Crown Court yesterday Judge Francis Sheridan said the company had failed to communicate its risk assessment to the actor.

He said: "The greatest failing of all on behalf of the company is a lack of communication; a lack because, if you have a risk assessment and you do not communicate it, what is the point of having one? That is the most serious breach here.

"If only they had included Mr Ford in all the discussions, he might have at least been alert to the dangers that he had to avoid."

Foodles had pleaded guilty to breaching ss 2(1) and 3(1) of the Health and Safety at Work Act at a hearing on 26 July, when Andrew Marshall, prosecuting, said the actor had been at "risk of death". Ford had walked through the door with another actor and hit the prop "close" button, though he did not expect it to shut because the cameras were not rolling and the set wasn't live.

However, the production crew member who was operating the prop believed they were in full rehearsal and closed the door. It came down on Ford like a "blunt guillotine, millimetres from his face", pinning him to the ground by his pelvis. The 1.2 m x 2 m door took just 1.6 seconds to close fully.

An investigation by the HSE found there was no automatic emergency cut-off to protect those on set; only the prop operator could stop the door closing. The regulator told the court that a combination of preventable factors, including the design of the door, had led to the accident.

A health and safety officer for the production company had previously pointed out the risk of serious injury or death from the door. The HSE said Foodles should have put in place a system to ensure the actors and production workers were protected. A different design with inbuilt safety features could have guarded against any possible miscommunication on a busy film set, it said.

Sentencing, Judge Sheridan said the door should have been fitted with an automatic emergency cut-off and called it "deplorable" that human intervention was required to stop it closing.

Charles Gibson QC, defending, said, although there was a "failure in communication" between Foodles and the actor, it was the only incident during the production. He argued the firm's culpability was in the medium category under the sentencing guidelines because there had been a risk assessment and safety plans were in place.

"This was an innocent mistake by bona fide professionals. Lessons were learned. The good health and safety record of this production continued to the end," he said.

The HSE's divisional director, Tim Galloway, said: "This incident was foreseeable and preventable and could have resulted in more serious injury or even death. The power and speed of the door was such that, had Mr Ford or anyone else been struck on the head by the door as it closed, they might easily have been killed.

"It was only the almost instantaneous actions of the prop operator in hitting the emergency stop that prevented the door from continuing to press down on Mr Ford as he lay on the floor."

As well as the fine, Foodles was ordered to pay £20,861 in costs. It was also due to face charges under reg 3(1) of the Management of Health and Safety at Work Regulations, which cover suitable and sufficient risk assessments, and reg 11(1) of the Provision and Use of Work Equipment Regulations, which require equipment to be safe to use. However, both of these were withdrawn as the facts were incorporated into the two admitted breaches.

Ford talked about the incident on The Jonathan Ross Show. He said that in the original film a door would have been closed with a pulley and a stage hand. "But now we had lots of money and technology and so they built a f****** great hydraulic door which closed at light speed."