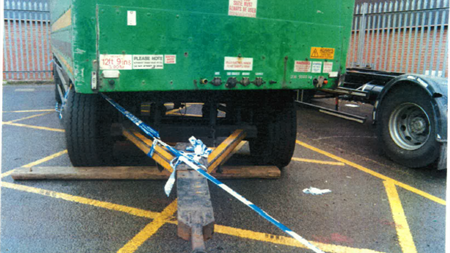 During the nightshift on 22 January 2016, Leighton Jardine was coupling his vehicle to the trailer -- known as a "wagon and drag" -- which had been loaded with parcels and parked on a 3° slope at a depot in Brierley Hill, Dudley. The trailer rolled forward and trapped Jardine between it and the rear of the vehicle.

The Health and Safety Executive (HSE) found safety arrangements for coupling trailers had failed to take account of the slope.

HSE inspector Karl Raw, who led the investigation, told IOSH Magazine that about two years before the accident the area where the trailer was left had been designated a no-parking zone with cross-hatched yellow box road markings. However, "it was a nightly occurrence that this trailer or a trailer of this type was parked there to be picked up. Management had never addressed this issue at all over a period of years."

Though Tuffnells had carried out generic risk assessments for parking and movement of vehicles -- District Judge Wheeler noted "this certainly wasn't a systemic failure" -- it had failed to consider site-specific factors.

Raw served a notification of contravention on the firm, which immediately notified its 37 depots to ensure there were arrangements to avoid vehicles and trailers being parked on slopes. The company has also updated the braking system on its fleet in case the accident had been caused by the trailer braking system being released to allow manoeuvring.

Raw said: "Tuffnells worked with the trailer manufacturers and it is now impossible for its trailer fleet to have the brakes taken off until the actual trailer braking system is under the control and power of the air brakes of the vehicle it's being attached to.

"That may sound obvious but trailers weren't manufactured like that. Tuffnells has certainly been very proactive in its measures taken post incident."

The company pleaded guilty to breaching s 2(1) of the Health and Safety at Work Act. In his summing up at Dudley Magistrates' Court, the judge set the starting point fine at £2.25m before considering the company's early guilty plea and remedial action.

Tuffnells, which reported turnover of £183.8m for 2017 and was classed as a large organisation under the sentencing guidelines, was fined £1.5m and ordered to
pay £32,823 costs.