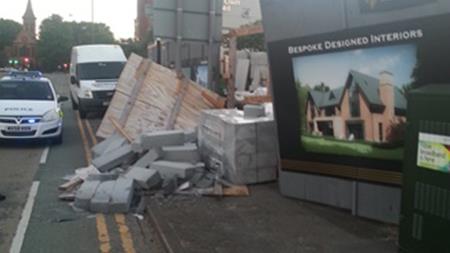 Altin Homes was leading the construction works at the former petrol station. It acted as client and main contractor and had hired several tradespeople and labourers.

In June 2014 a stack of building blocks collapsed and fell through the site hoarding onto a pavement and cycle lane. "It was nothing other than good fortune that no pedestrians were passing along the pavement when the blocks fell," said Health and Safety Executive (HSE) inspector Matt Greenly.

Investigating the collapse, inspectors noted there were other poorly stacked building blocks at the site. The HSE inspector served Altin two prohibition notices, two improvement notices and a notification of contravention and told the company to remove the blocks to reduce the risk of them falling through the hoarding again.

When the HSE returned to the site two weeks later, Altin had still not removed the unsafely stored blocks that had initially collapsed, though it had dealt with some of the other problems.

The company was charged with failing to protect the safety of its employees, subcontractors and members of the public and with one count of failing to plan, manage and monitor construction work so that it was carried out on a safe manner.

Altin pleaded guilty at Trafford Magistrates Court to breaching Sections 2(1) and 3(1) of the Health and Safety at Work Act and Regulations 22(1)(a) of the Construction (Design and Management) Regulations 2007, which cover the duties of a principal contractor. It was fined £40,000 with £3,000 costs.