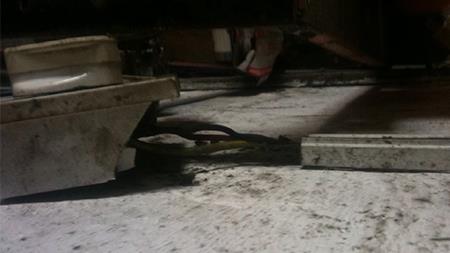 Swansea Crown Court was told on 6 June that George Jones, who operates a scrap metal business at Carew Cars at Carew Airfield near Tenby, Pembrokeshire, had instructed an employee to plug a tyre stripping machine into a wall socket when the incident happened on 12 March 2014.

As the employee was operating the tyre stripper, the machine suddenly cut out. Wales Online reported that when he reached for the socket to unplug the machine, he was thrown 2 m across the workshop by a powerful electric shock.

Alan Fuller, prosecuting, said the employee was left "disorientated" and with chest pains. He managed to call 999 and was rushed to Withybush Hospital. Since the incident, however, he has been unable to return to work and has needed extensive physiotherapy.

Wales Online reported that Firefighters used special gauntlets to isolate the building's power and found that Jones had been operating the Carew Cars unit with an old domestic distribution board using Bakelite components. The fire service told the court that the state of the electric system in the building was "a mess".

An inspector from the Health and Safety Executive (HSE) had tried to visit the building on 1 April 2014 but found a forklift truck had been parked across the entrance and staff said they could not move it.

When inspectors returned the next day and accessed the building, they found the socket feeding the tyre stripping machine had been replaced. They also found that the building was being powered by a 13amp extension cable from a neighbouring unit. The HSE later found that the domestic distribution board had also been changed.

Fuller said the electrical installation was unsafe and more suited to a domestic rather than commercial premises. The socket was in poor condition with exposed wires. Also, the roof had holes in it and there was evidence of rainwater running down the internal walls and forming pools on the floor. The prosecutor added that there was "a risk of individuals receiving potentially fatal electric shocks".

The HSE served improvement notices on the building, which were complied with. However, Jones failed to respond to the regulator's calls and emails and did not attend appointments. He also failed to submit any evidence in writing as requested.

Jones pleaded guilty to breaching s 4 of the Health and Safety at Work Act. He is currently serving a prison sentence for a 2014 conviction related to an illegal scrap metal and car reclamation business, which he ran from the airfield site with his son. When he failed to pay a £208,000 Proceeds of Crime Act confiscation order, he was sentenced to 912 days in default. He is not due to be released until December and will serve his 18-week prison sentence concurrently with the earlier conviction.

Judge Paul Thomas said the fact that Jones had taken steps to disguise the situation from the inspectors was an aggravating factor in the case. The judge said the starting point for the sentencing was 24 weeks in prison, but this was reduced after he gave the defendant a 25% discount for his guilty plea.

The judge declined to impose the prosecution's costs on the defendant because Jones still owed the outstanding £208,000, which would be payable on his release from custody.

HSE inspector Annie Marie Orrells said that the case underlined the importance of regular proactive maintenance and inspection of work equipment, including electrical installations to ensure that they did not deteriorate to the extent that lives were put at risk.