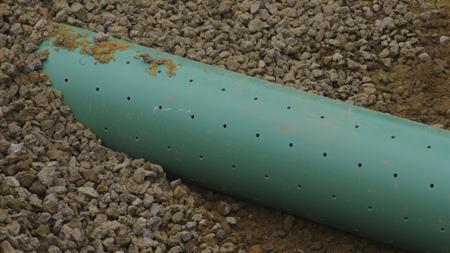 A company owned by William Ryan Evans was contracted to build a drainage field with infiltration pipes laid at the bottom of deep trenches, Swansea Magistrates' Court was told. The pipes, which were 10 cm in diameter and made of lightweight, perforated plastic, aid the distribution of treated effluent through the field.

Evans employed two workers and subcontracted an excavator to undertake the work at Longstone Farm in Pembrokeshire. On 26 June 2012 Hywel Glyndwr Richards, 54, entered the trench to remove a clump of soil that had fallen into the trench when it collapsed. He was buried and died at the scene.

During its investigation, the Health and Safety Executive (HSE) found that the work had not been properly planned and the risk assessment was not suitable or sufficient. The workers were not correctly trained and equipment that could have prevented the trench collapsing had not been provided.

Evans was sentenced at Swansea Crown Court on 11 April. He was found guilty of breaching Section 2(1) of the Health and Safety at Work Act and was given a six month custodial sentence.

HSE inspector Phil Nicolle said: "Work in excavations needs to be properly planned, managed and monitored to ensure no one enters an excavation deeper than 1.2 m without adequate controls in place to prevent a collapse."