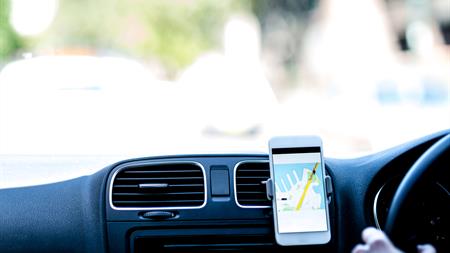 The study is based on survey responses from more than 200 taxi drivers and parcel and food couriers who work in the gig economy, as well as 48 in-depth interviews with gig workers and their managers.

The researchers from the UCL's Centre for Transport Studies found that 42% of the online sample had damaged their vehicles in a collision at work.

Nearly half (47%) said they would break the speed limit to meet time pressures and 30% admitted they had gone through a red light. The mobile phone apps used to receive jobs were a distraction for 40%.

Stress and fatigue were also cited as risk factors, with 16% of respondents agreeing that they had struggled to stay awake at the wheel.

Co-author of the report, The Emerging Issues for Management of Occupational Road Risk in a Changing Economy, Heather Ward, said: "Our findings highlight that the emergence and rise in the popularity of gig work for couriers could lead to an increase in risk factors affecting the health and safety of people who work in the gig economy and other road uses.

"As more workers enter the gig economy and competition rises, the number of hours they need to work and distances they must travel to earn a stable income both increase. We know this is an issue but don't know exactly how far it extends as not all companies need to report the number of self-employed couriers they use to the government."

The report found that only 26% of self-employed drivers believed that the companies they worked for took responsbility for their safety; 63% had not received any safety training on occupational road risk. The majority -- 65% -- had not been given any safety equipment such as hi-vis vests.

Almost half of the sample (45%) disagreed with the statement: "There is a person at my gig company that I can contact if I have any concerns about safety at work".

The report recommends that gig companies pay couriers based on the time worked rather than the number of packages delivered (known as the drop rate) to depressurise work.

It says drivers should not be required to accept or reject jobs on their smartphones while moving and advised companies against incentivising riders and cyclists to take extra risks by paying a higher rate to work in poor weather conditions.

The report urges managers of gig economy workers to use collisions and near-misses as learning opportunities and recommends there should be someone in each company responsible for the safety of its drivers and riders.

"In previous years the UK had a good road safety record, but deregulation over the last few years as left self-employed couriers and taxi drivers at an increased risk of exploitation. The Health and Safety Executive has regulations on safety at work, but these don't apply to those whose work takes place on public highways," said co-author Dr Nicola Christie.

"I hope to see the recommendations in this report taken on board by the Department for Transport (DfT) and incorporated into health and safety regulations as the gig economy is set to continue to increase."

John Greenhough, fleet consultant at RoSPA, said: "This demonstrates the need, more than ever, for all employers to develop a systematic approach to managing occupational road risk that is appropriate t their business."

Mick Rix, national officer for the GMB trade union, said: "The damning conclusions of this report back up what GMB has been saying for years -- gig economy employers, particularly courier companies, are exposing delivery drivers, riders and the public to unacceptable risks to their health and safety.

"Our members tell us every day how Amazon delivery and work schedules are so demanding drivers work through breaks and do dangerously long hours.

"GMB calls on the government to bring forward legislation to enhance driver and public safety -- the same laws which exist for those working in the more traditional employment models."

Figures from the DfT show that work-related road accidents in Great Britain in 2016 killed 529 people and seriously injured 5,269.