PPE special: Getting your kit off (and on) 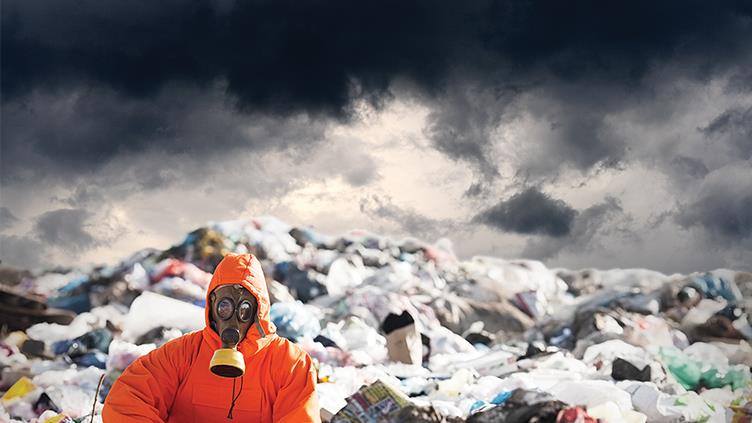 Working with hazardous substances covered from head to toe in personal protective equipment (PPE) is of limited value if it has not been put on properly to ensure the promised protection. And if the wearer falls at the final fence by transferring hazardous material to themselves in removing the clothing and equipment, then some of the value will be lost and they could be exposed to risks ranging from mild skin or throat irritation, through dermatitis or asthma to cancer.

Protective clothing must be put on in the right order. Workers should be trained not to try to put coveralls on over footwear. Hazardous residues on the soles of shoes or boots from the floor of the changing area are likely to rub off on the inside of coveralls or safety trousers. Even when there is no contamination risk, footwear soles can tear fabric around the elasticated ankles of protective suits.

Ideally, leg coverings should be donned sitting down to avoid the risk of overbalancing. At sites where there is no dedicated changing area, workers should change as far away from hazardous areas as they can, in vehicles if possible.

Once leg protection has been put on in stockinged feet, workers donning one piece suits should stand and put their arms through the sleeves but leave the front unzipped.

Respiratory equipment and/or goggles should be put on before putting a suit or jacket hood up or donning a hard hat. Placing the retaining bands of these items under a hood will protect them from contamination and make them easier to clean at the end of the work period.

Once the hood is up or hat on the next step is to zip up the front of the suit making sure the zip locks. Donning gloves is the last step in the sequence. 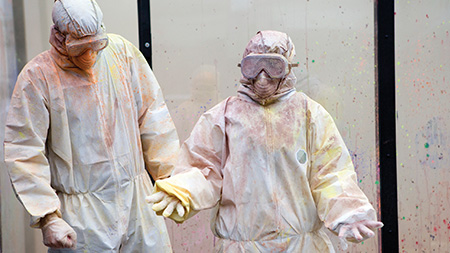 At the other end of a shift, too hasty removal of the garments that have been safeguarding the worker risks sudden unintended exposure to the contaminants they have been avoiding.

If they have been working with hazardous liquids their PPE suits may need decontaminating before removal by gentle washing down, containing the waste water.

Workers wearing masks or respirators should be taught to resist the impulse to remove them first to breathe more easily. Respiratory protection will guard them against any hazardous material released while doffing the rest of their PPE.

Richard Sansom, product and procurement manager at Arco, says that the correct disrobing sequence is important to avoid contaminant on the outer surface of the PPE being transferred to the skin or other clean objects, including PPE items.

As long as there is an uncontaminated surface to stand on, footwear must be removed before overalls, even if the wearer can easily fit the overall over their boots. As at the donning stage, this prevents the substance on the bottom of the boots getting inside the overall and increasing the risk of cross-contamination.

Anyone wearing a protective suit should unzip it, then hold the suit's loose material at the neck in both gloved hands and pull the hood away from the face, turning it inside-out. This avoids any surface contamination on the hood's outer edge touching their neck.

Putting both arms behind their back they should next use one hand to pull the glove off the other plus the sleeve of the suit. Then, bringing the ungloved hand round to the front they should grip the inside of the suit at the opposite shoulder, peeling it back off the arm and taking the glove with it.

The next step is to sit down if possible and continue peeling the suit down the legs, remove it and put it in a disposal bag or its original wrapper. Removal of goggles and respiratory protection comes next, using new disposable gloves or holding them with another uncontaminated piece of cloth or tissue.

With the ungloved hand they should then slide a finger under the wrist of the remaining glove, taking care not to touch its outside and, again, peel it down. As the second glove is turned inside out, it should cover and contain the glove that was doffed first. The result will be that both gloves are inside out, one enveloped inside the other ready for disposal, with no contaminant on the bare hands.

Knowing how to use PPE is just as important as wearing it in the first place, so it's vital employers place just as much emphasis on training as they do on procurement.

Just wearing the correct equipment is no guarantee of protection from workplace hazards. Getting in and out of it in the right way will help ensure PPE does its job.