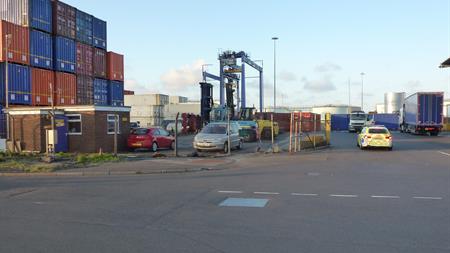 Lyndon Perks sustained multiple injuries and died at the scene following the incident, which took place at the port's east gate off Mineral Quay Road at Immingham Docks, North East Lincolnshire, on 9 September 2015.

The ICTS (UK) employed security guard had approached the articulated vehicle as it entered the port, which is operated by Associated British Ports (ABP), on its way to the DFDS Seaways warehouse.

The 50-year-old was not visible to the driver, either on his approach to the HGV or as he walked in front of it and was dragged under the lorry.

Judge Paul Watson told Hull Crown Court that Perks had stepped forward to flag down the HGV driver for security checks and, because the vehicle stopped, assumed the driver had seen him.

"He walked across the front of the lorry, presumably to go to the driver's side to speak to him, when the lorry pulled forward and made its turn into the DFDS Seaways' area of the terminal."

The Health and Safety Executive (HSE) found that ABP, which has responsibility for the port's infrastructure, had failed to update its workplace transport risk assessment after the opening of the east gate in December 2014.

ABP also required the security guard at the east gate to stop traffic and check pedestrians and vehicles entering the terminal but failed to provide the means to do so safely. There was no signage indicating that drivers should stop and report to security, and no safe facilities.

The HSE found that the traffic control systems were inadequate. The physical layout of the area around the east gate was confusing and did not have the appearance of a security entrance. The security building was unmarked and was not easily identified, and there was also no physical protection, such as a security barrier, for the security staff.

Judge Watson said that the very fact that changes have been made since, including a platform, a new gate and security system, walkways and traffic lights, "illustrates clearly the deficiencies of the previous system and procedures".

ICTS (UK) had failed to provide adequate training and safety information for Perks. In the event of a vehicle not stopping at the gate, his instructions were to contact the security team, who would deal with the vehicle and intercept it. However, ICTS (UK) accepted that it had failed to instruct Perks with sufficient clarity the extent and limitations of his role, notably that he should not try to stop vehicles at the site entrance.

The court was told that DFDS Seaways had failed to provide a specific workplace transport risk assessment for work carried out on the roadway immediately adjacent to the front of the warehouse ("the canopy") where its vehicles were sometimes loaded and unloaded.

When the east gate opened, there was a significant increase in vehicle movements and the judge said: "The volume of traffic was such that it was a plain requirement that the issue of the presence of pedestrians on the roadway outside the canopy was something that had to be addressed."

The judge said that, in the case of ABP and ICTS (UK), the companies' offending was a significant cause of actual harm and moved up the harm category for both to reflect this (see table below for how the sentencing guidelines were applied).

Judge Watson said that all three companies had excellent safety and health records and had taken appropriate action to deal with the failings identified. "Not one of them can be accused of putting profits or the interests of shareholders before those of their highly valued employees and for whom they have responsibility."