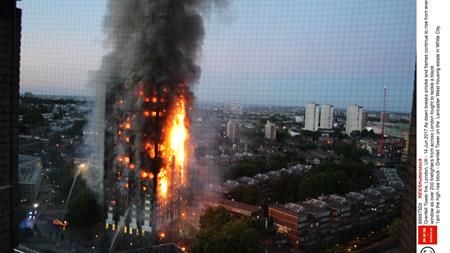 Known as the "stay put" policy, the strategy requires occupants to wait in their homes unless they are directly affected by fire or smoke.

However, chartered fire engineer and expert witness Dr Barbara Lane told the Grenfell Tower public inquiry on Monday (4 June) that although the principles of the stay put regime had "substantially failed" by 1.26am, the LBF did not abandon the policy until 2.47am -- more than 80 minutes later.

At that time 107 occupants were still inside the building and more than 70 were killed as the fire continued to spread throughout the 24-storey block in North Kensington, London, on 14 June 2017.

Yesterday's inquiry was told that firefighters had no "obvious and safe alternative strategy" than ordering residents not to leave during the fire.

Matt Bonner, Metropolitan Police detective superintendent who is leading the investigation, said: "The LFB would, as any other organisation involved, have an obligation to conduct their activity in a manner that doesn't place people at risk. It doesn't mean that they have or they haven't, but that's where the legislation is most likely to arise if that was an eventuality."

Met Police commander Stuart Cundy added: "It's an absolute obligation on us to be looking at the most serious potential criminal offences that may have been committed."

The LFB, the Fire Brigades Union (FBU) and the Fire Officers Association (FOA) delivered their opening statements to the inquiry yesterday (7 June).

Stephen Walsh QC, on behalf of the LFB, told the chairman of the inquiry Sir Martin Moore-Bick that the stay put policy was stipulated in the building's evacuation procedures and is not set by the fire service.

He said it is "not a creation of fire services in the UK; rather, it is a principle of building design which is provided for in legislation, which fire services are expected to apply and which underpins the development of fire safety and operational policies for buildings of this kind nationally".

Louis Browne of the FOA echoed Walsh's remarks: "Simultaneous evacuation of residents in the event of fire is not factored into the design of buildings such as Grenfell Tower. That is evident from the fact that there is no common fire alarm and the only means of escape was a single stairwell. The stay-put policy is therefore a building design principle and is not a creation of the fire service."

In his opening statement for the FBU, Martin Seaward said: "It's clear there is a huge concern over the continued application of 'stay put unless' once compartmentation had been breached, but there remains no obvious and safe alternative strategy -- certainly no detailed plan or training for one.

"The FBU invites the inquiry to consider what alternative strategy might have been implemented and whether, on the night and without any such procedure or training, the early incident commanders could or could not reasonably have moved to an immediate or phased evacuation at an early stage of the fire development."

Any charges would most likely be brought under s 3 of the Health and Safety at Work Act for putting the public at risk.