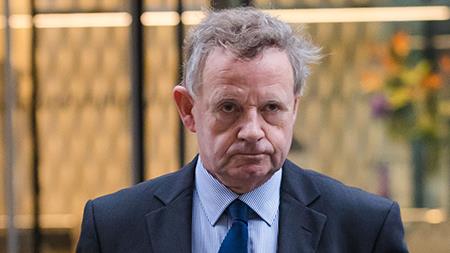 Andrew Hill, a trained Royal Air Force instructor, was attempting a bent loop manoeuvre in his 1950s Hawker Hunter at the Shoreham Airshow in West Sussex when he lost control on 22 August 2015.

Jurors were told that he was flying too low and with not enough power when he began the aerobatic stunt. The jet plunged into traffic on the A27 dual carriageway, causing a fireball.

The prosecutor told the jury that there had been times in the past when Hill had "taken risks" or flown in a way that he would not be expected to. He said that a year before the crash, the pilot had "performed a dangerous manoeuvre" at Southport Air Show in Merseyside. Organisers had issued a "stop, stop, stop" call to curtail the display.

The Guardian reported that Hill's display authorisation, a licence issued by the Civil Aviation Authority, allowed him to fly the plane down to a height of 30 m during fly-pasts and 152 m when undertaking standard manoeuvres such as the loop during a performance.

On the trial's opening day, 15 January, Tom Kark QC for the prosecution told the court that Hill had a "heavy responsibility" to plan displays so that no-one was put at risk. He added that it had been the experienced pilot's duty to ensure the jet fighter remained at the permitted height and did not breach no-fly zones around Shoreham airport.

Kark added that the Hawker Hunter was in "excellent working condition" and that the crash happened because of pilot error.

Hill was attempting a bent loop manoeuvre which requires the pilot to take the aircraft to around 1,100 m before it begins its downward trajectory. The Old Bailey trial heard that, although Hill only reached about 850 m, he persisted with the manoeuvre.

The BBC reported that the aerobatic move was "perhaps the highest-risk manoeuvre in an aircraft which is not designed as a pure aerobatic aircraft."

During the trial Derek Davis, chairman of Shoreham Airshow's flying control committee, said that the way the plane was "waffling down" towards the ground indicated "there is something wrong with either the aircraft or the pilot".

However, Davis added that Hill "was not desperately trying to miss the ground or anything. He was doing nothing."

Hill, he said, did not apply power that would have been needed to pull out of the dive and did not use his radio to alert air show staff that he had a problem.

The Air Accidents Investigation Branch (AAIB)'s final report into the incident found that Hill, who was a British Airways airbus captain at the time, was too low when he began the manoeuvre.

"Although it was possible to abort the manoeuvre safely at this point, it appeared the pilot did not recognise that the aircraft was too low to complete the downward half of the manoeuvre," the report noted.

"An analysis of human performance identified several credible explanations for this, including not reading the altimeter due to workload, distraction or visual limitations such as contrast or glare, misreading the altimeter due to its presentation of height information, or incorrectly recalling the minimum height required at the apex [of the stunt]."

Sussex Police, which investigated the 2015 incident, submitted a full file of evidence to the Crown Prosecution Service (CPS) in relation to Hill's actions.

In addition to the 11 manslaughter charges, Hill has also been charged with endangering an aircraft under Art 137 of the Air Navigation Order 2009.

Hill pleaded not guilty to 11 counts of manslaughter by gross negligence and one count of recklessly or negligently endangering an aircraft in August 2015.

The Old Bailey was told that Hill had served with the Royal Air Force between 1985 and 1994, which is where he trained to fly, becoming an instructor and pilot in fast jets. Although he had completed more than 1,600 hours in planes, Kark argued that when the crash happened, Hill "fell far below his usual standards".

The defence has argued that Hill had "responded professionally" and taken steps to avoid repeating the mistakes.

In addition to the 11 fatalities, 13 people were also injured in the crash, including Hill who was thrown clear and taken to hospital with serious injuries. He was placed into an induced coma and later discharged.

Jurors were told that the AAIB's report into the crash would not form part of the prosecution's evidence and should be disregarded.

The trial could last eight weeks.