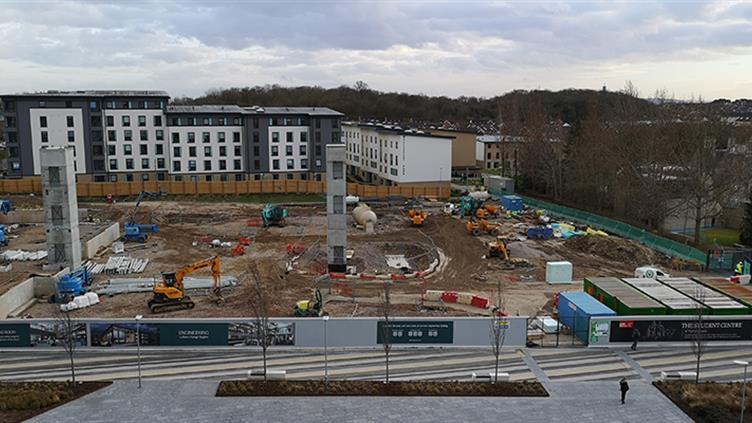 When conveying critical safety and health information, sometimes less is more. For example, OSH professionals condense information about hazards, prohibitions and requirements into simple signs that are relatively easy to understand. Of course, they can be over- or misused but the underlying principle is that presenting crucial information simply and graphically can greatly aid communication.

When managing construction activities, the Construction (Design and Management) Regulations 2015 (or CDM) and associated guidance remind dutyholders of the need to provide proportionate and relevant information clearly and concisely. This should prevent genuinely important information becoming lost in a forest of trivia.

Published by the Royal Institute of British Architects (RIBA), CDM 2015: a practical guide for architects and designers used the term "CDM differently" to describe an approach of conveying critical information visually. RIBA promotes the use of sketches or annotations of drawings in line with the industry guidance for designers.

To give a simple example (see image 1), the sketch shows the design for new drainage ahead of a housing development. The designer, a civil engineer, had considered the practicalities of delivering the project. Access was negotiated through the neighbour's car park (shown by the black arrows) and, as part of the negotiations, an area was set aside for a compound. By carefully positioning the ravine, the designer has created a holding area for the significant quantities of earth that would arise (or those arisings could even be incorporated into landscaping). 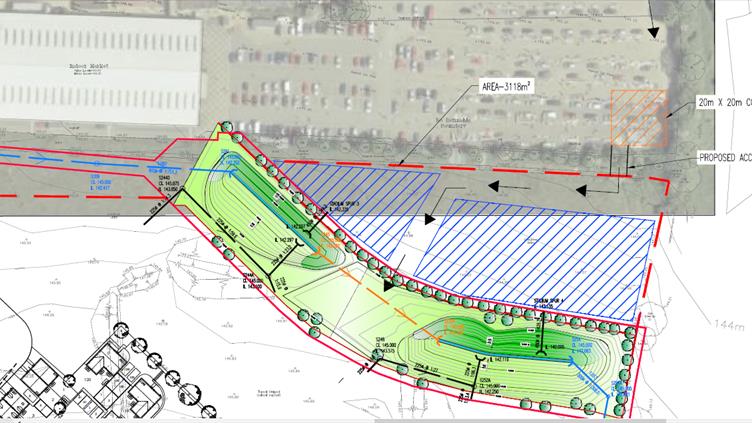 Incidentally, this shows how the input-process-output model, a tool more commonly used in environmental management, can be used to help site managers to understand the constraints and logistics. In this case, the process was the formation of the ravines. To enable this task, the team needed to input workers and equipment and manage the outputs (the arisings).

This image could be improved with annotations to explain these constraints and decisions. If someone then considered changing the shape, size or position of the ravines they could clearly see the implications. Similarly, the drawing could signpost readers to the information ("pre-construction information") that informed the design.

Text boxes, perhaps with a suitable symbol attached, can draw attention to significant, unusual or difficult-to-manage hazards (such as high groundwater) and what designers have done to mitigate their impact (such as allowing for wider and shallower trenches rather than narrow but deep excavations). This also illustrates how drawings can convey assumptions about what temporary works, such as excavations or scaffolding, may be needed.

The concept of using drawings in this way is equally valid for other dutyholders. In another example (see image 2), a client's project manager set out their initial assumptions about the general organisation of a refurbishment project in the middle of an operational site. The image includes proposed parking and storage locations, the nearest welfare facilities, the extent of the building that will be handed over to the contractor, power and water points and suggestions about which access routes to use. 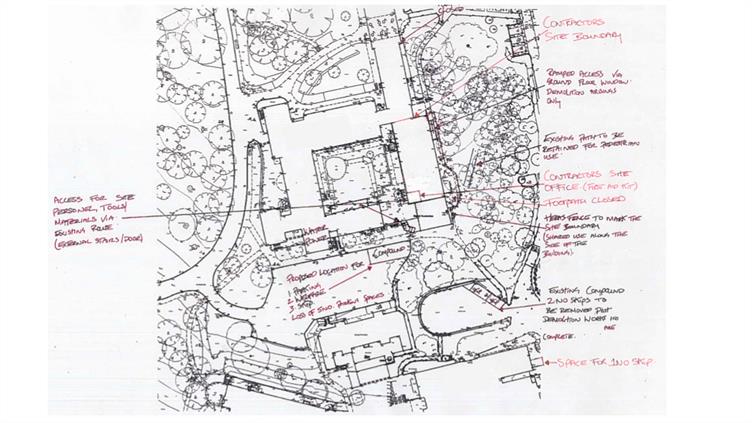 A client could easily convey specific rules or hazards on a site plan, such as areas that can be accessed only under a permit to work or stores for hazardous materials. Photographs can clarify understanding, even of something as simple as which removable bollards will be moved by the client's team to provide access for contractors' vehicles. This information could be developed into a "generic" site plan for contractors performing minor projects on a site.

Clients should be able to use the plan to consider and record the wider impact of a project on their own employees, visitors and operations, the actions needed and by whom. For example, if traffic within the client's site had to be diverted temporarily, a site plan could record those arrangements and allocate responses, such as installing and removing temporary signs. The client's health and safety adviser is likely to be a valuable contributor to these discussions.

A site plan can help a client to meet their first duty under CDM 2015, which is to make suitable arrangements for managing the project. For example, after considering site constraints, risks and logistics, a client will be better placed to decide the scope of work, the time and resources they need and the capabilities their team requires. Clients that convey critical information succinctly and visually also set that tone for the rest of the team.

Occasionally, clients are nervous about providing this information, concerned that they would be responsible if something went wrong. Clearly, if a client proposed that contractors set up a compound in a position that blocked a fire escape route (without other arrangements being assessed and implemented), a client may end up answering to less-than-happy regulators.

Without initial direction from the client, the contractor will make assumptions while tendering. However, the client may require changes while the contractor is preparing for or even carrying out the work. The contractor could find that the resources and time allocated to the project are no longer enough, possibly leading to contractual arguments. A better approach is to share the plan during the tender process, walk and talk the tendering contractors through the site, and invite them to share comments and ideas with their proposals.

Of course, a client site plan would be less relevant for a remote brownfield site: clients need to determine what is relevant and proportionate information project by project.

Principal contractors often use marked-up site plans as a foundation of their construction phase plans. The final example (see image 3) was taken from a tender response. It illustrated how the contractor, which eventually won the work, had taken on board the risks and constraints of the site. Importantly, it shows the position of the compound and site fencing and highlights a key hazard (high footfall) before indicating where pedestrian warning signs could be posted. It reassures the client that the contractor was aware of and allocated enough time and resources for managing these issues. 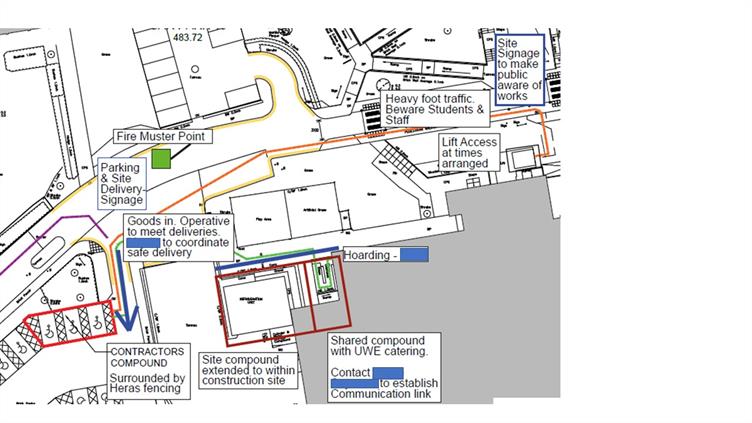 On larger projects, a principal contractor's site plan(s) can justifiably end up being quite detailed, providing information about fire precautions, welfare and first aid facilities, traffic management and so on.

Such a plan could form the basis of a simple site induction to ensure workers receive useful, site-specific information.

Conveying critical information about a construction project in the form of annotations on designs and site plans is a simple but effective way of concisely passing on relevant and project-specific information. This is likely to be genuinely helpful for everyone involved in a project. In the spirit of "safety differently", it requires the courage to identify and dispose of unhelpful bureaucracy.