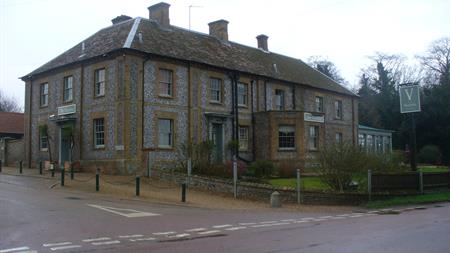 Geoffrey Saunders, 86, was staying at Ancient House -- part of the Victoria Hotel in Holkham -- when the accident happened in September 2016.

North Norfolk District Council (NNDC), which brought the case against The Victoria at Holkham, said Saunders sustained "catastrophic" and "life changing" injuries while having a bath. He spent six weeks in hospital and still experiences health issues, including painful scars.

Huntingdon Magistrates' Court was told that Saunders had been topping up the bath when scalding water came out of the tap and landed on his back. He was unable to turn it off and "instinctively recoiled", becoming trapped in the bath while boiling water poured in, NNDC said.

The council's investigation found that the hotel had failed both to fit thermostatic mixing valves to its bath taps and to display hot water warning signs, which it thought would detract from the rooms' dÃ©cor.

In addition, it had not acted on a consultant's recommendations to control excessively hot water, though unsafe temperatures were routinely recorded in the temperature logs.

The design of the bath made it difficult for elderly guests to climb in and out.

NNDC said the incident had occurred when the hotel had addressed the risk of Legionnaires' disease and had "created and perpetuated" scalding risks.

The Victoria at Holkham pleaded guilty to two charges under the Health and Safety at Work Act. It was fined £50,000 and full costs were awarded to the council.