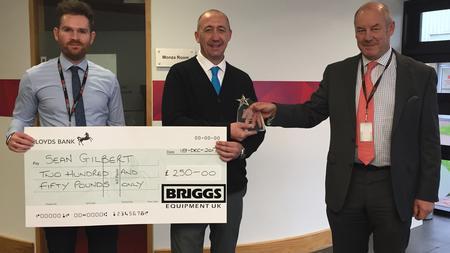 Sean Gilbert, whose 25 years at 3M's Atherstone plant in Warwickshire include ten as a lift truck driver, was handed the award in January for "demonstrating exceptional commitment to improving site safety for everyone working with or alongside forklift trucks".

Gilbert was promoted to the company's national Health and Safety Group in February 2017 after working in the plant's warehouse for a decade and used his experience on the shop floor to develop and deliver training on pedestrian safety from the driver's point of view.

He explained that 3M, which manufacturers abrasive materials at the facility, employs around 20 drivers at its 8.9-hectare site in Atherstone, who operate a range of powered vehicles and sit-on trucks.

From his time as a driver, Gilbert recognised that the physical separation between pedestrians and vehicles needed to improve and that changes to the layout of operating areas and to work routines would help. Stepping into his new role gave him the opportunity to make improvements.

Using feedback from discussions with the plant's forklift truck drivers and pedestrian workers about safety issues on the site, he put together a presentation, intended to give non-drivers a better understanding of vehicle operators' perceptions and priorities.

"A lot of pedestrians don't appreciate the restricted view that drivers have from the seat of a truck," said Gilbert, who used photographs from the driver's cab to illustrate poor sight lines, how different loads can further reduce visibility and the risks associated with truck movements in high-hazard areas.

"It was the driver's perspective that I wanted to get across," he added. "The photos really do justice to the more difficult areas of the plant."

Blind corners and pillars were two of the main hazards that were identified during the training sessions. Gilbert reiterated the site rules about giving drivers priority and emphasised the need for pedestrians to make themselves visible and leave a safe distance between themselves and vehicles.

"[The training] was about [telling them to stand] in a space where they can be seen or out of the way where they won't be causing a problem," he said.

"We told them about the importance of not distracting the drivers when they are doing lifts and letting them do their jobs before interacting with them," added Gilbert. "It sounds basic but when workers don't understand or realise, they need that information."

In the Health and Safety Group, Gilbert recommended a new segregation system. This led to a £250,000 investment in redesigning the layout of operating areas, both in the warehouse and yard. The project is due for completion later this year and will be shared as best practice with other 3M distribution locations.

The Atherstone plant, one of nine UK manufacturing sites, currently employs about 250 staff. The plant has been developed piecemeal since it was opened in 1964, so introducing the new transport system required careful management.

"There have been layout changes in the plant. We've had to move machinery around and changed how an area works," he said.

To support the changes, Gilbert also undertook a site-wide review, looking at vehicle movements and lifting.

"It's been a learning curve coming into an EHS [environment, health and safety] role," he said. "Having 25 years' site knowledge and earning the respect of my co-workers during that time has helped me get the message across.

"With every site, there are going to be issues with interaction with pedestrians. It's just that the education and knowledge is there now. We don't have any cases of misconstrued instructions across the site. Everybody is clear on what they need to do."