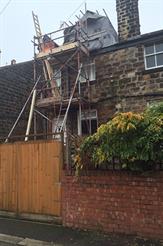 The roofer, whose fall was broken by a plastic children's playhouse, sustained a traumatic brain injury, bruising, and damage to his left arm.

Poor weather conditions meant that the roofer had to work on the unprotected area to cover the dormer extension and make sure it was watertight. He was at the dormer's side when the accident happened on 29 October 2015.

A Health and Safety Executive (HSE) investigation found the scaffolding did not extend fully across the intended work area and failed to provide protection along the edge where the roofer was working.

Riley of Fox and Hounds House, Tockwith Road, Long Marston, North Yorkshire, pleaded guilty to breaching s 3(2) of the Health and Safety at Work Act. He was handed an eight-month sentence, suspended for two years, along with a compensation order for £5,000. He must also pay £2,000 in costs.