PC fined £600,000 after worker was killed by dumper truck 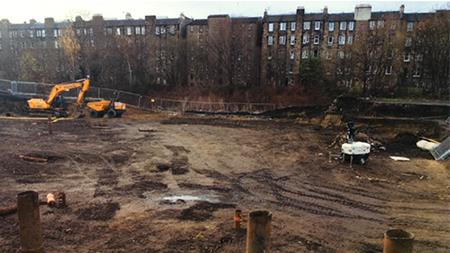 A construction company has been fined after a labourer was fatally struck by a dumper truck in Scotland.

Agency worker Vincent Ramsay, 55, was killed at a former bus and tram depot in Leith, Edinburgh, where he had been working for Allenbuild since August 2016.

The London-based construction firm was the principal contractor for the site's redevelopment, which involved building housing and an underground car park.

On 5 December 2016 Ramsay was near the bottom of a dirt ramp used to access the car park. He was crouched down spray-painting marks on to pile foundations (a long cylinder of strong material that acts as a stable foundation for structures built on top of it).

Edinburgh Sheriff Court was told that the driver of the forward tipping dumper truck had restricted visibility because of a load of excavated earth it was carrying. He had not seen Ramsay and ran over him.

After the accident Allenbuild prohibited the piling works until the bulk excavation works had been completed, to prevent any work on foot taking place while heavy machinery was operating.

It revised its traffic management plan and implemented a segregated pedestrian walkway to the top of the dirt ramp and along the side of the car park. It also installed a physical barrier to demarcate the piling zone.

Allenbuild pleaded guilty to breaching reg 27(1) of the Construction (Design and Management) Regulations 2015 and s 33(1)(c) of the Health and Safety at Work Act. It was fined £600,000 on 1 February. (See table below for how the sentencing guidelines were applied.)

Sheriff Norman McFadyen said: "The company should have recognised that there were instances where site personnel were required to access the underground car park area on foot and that they would have to carry out work either on or near to traffic routes used by heavy plant.

"As such the company should have taken measures to ensure that such pedestrians were not at risk of being struck by moving plant and the easiest way to achieve this would have been to ensure that all workers on foot in the underground car park area were scheduled so that they did not coincide with times when plant would be operational there. Access by pedestrians should have been prohibited outwith these scheduled times."

After the hearing Health and Safety Executive inspector Rob Hirst said: "This was a tragic and wholly avoidable incident that arose due to the company's failure to ensure that pedestrians were not carrying out work on or near traffic routes whilst vehicles were in operation."