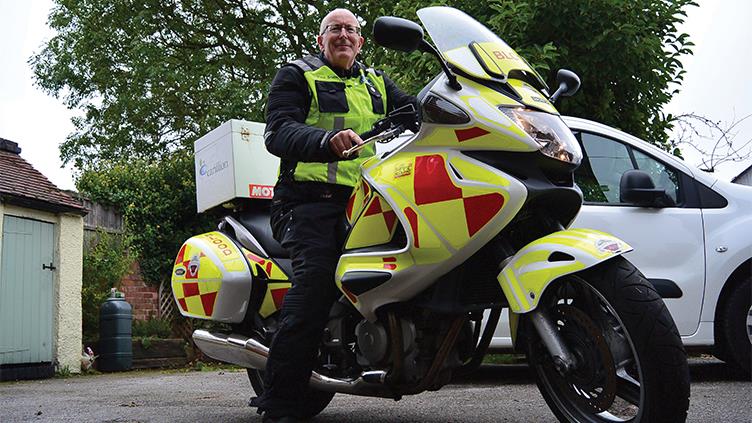 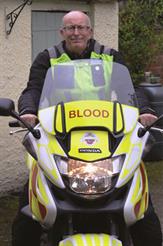 The groups are run by volunteers who fill various roles: the riders, obviously, but also fundraisers, co-ordinators and people who take calls -- there has to be someone available to take calls at all times. So there are many volunteers who never ride.

My mum and dad never learned to drive so there was never a family car. A motorbike was my first form of motorised transport. When I first joined the Health and Safety Executive as an inspector, I didn't have a full car licence, so I went to inspections on my motorbike. I'd turn up in all the gear and announce that I was the factory inspector and people would say: "No you're not!" I didn't fit the image. More recently, there was a point when I found that I was riding with people who went faster than I was comfortable with, so I joined the Institute of Advanced Motorists and took the advanced motorcycling test, which I passed first time. To ride a blood bike you must have a full licence and advanced certification, such as a police rider or RoSPA qualification.

There's a run our group does regularly where we collect a sample from a lady's house and take it to Birmingham Children's Hospital. This enables the hospital to adjust the medication the lady's daughter needs. It's very unusual, as we don't usually meet the "end user". I did the collection recently and it really brought home to me the value of the service: I can collect a sample from a house in Derby just before 8am and have it in a hospital lab in Birmingham by 9am because I can filter through rush-hour traffic.

The aspect I enjoy most is the feeling that I'm putting something back. The bikers I've met in the group are very responsible and very concerned about the adverse view of motorcyclists, so there's an element of conscientiousness.

In my career I've held a couple of director posts and had responsibility for hefty budgets and large OSH teams. With the blood bikes, I like being a foot soldier -- there's no responsibility beyond getting from A to B safely and that's refreshing. I like the simplicity.

There's a lot of emphasis on safety. In some groups you ride your own bike but Derbyshire Blood Bikes has its own liveried fleet. Every time we go out we have to inspect the bike first using a checklist. The bikes are used by up to 30 people so you need to be satisfied yours is safe before you take it out. If you're driving a car and there's a nail in the wheel, you might notice the steering is a bit vague before you realise there's a problem and stop to sort it out. If the same thing happens on a bike when you're on the motorway, at best you're going to have a very frightening experience. There's much more at stake on a bike.

All the riders in our group do some fundraising and it's really good fun. Riding is a solitary activity: you speak to someone when you pick up a sample and when you deliver it, but the rest of the time you're alone -- there's no conversation when you're doing 113 kph on the motorway. With fundraising, you can choose to attend events that interest you and it's an opportunity to chat with people and promote what we do. We go to fetes, festivals and the local steam day to raise money and to recruit volunteers. Lots of my work these days is writing, also a solitary pursuit, but the blood bikes group has given me a new network of friends and colleagues.

I would recommend getting involved with your local group. You can do as much or as little as you like; I do two or three days a month plus a couple of fundraising events. Now that I'm self-employed, it helps the rota most if I do daytimes since many volunteers aren't available during the day.

We're motivated by public service; we want to volunteer to help the NHS. But there's another rewarding aspect: when you're out on a blood bike, you see the public at its best. People are exceptionally considerate. As soon as drivers see you're riding a blood bike -- and we don't have sirens or lights, just the distinctive day-glow livery -- they go out of their way to pull aside and let you through.