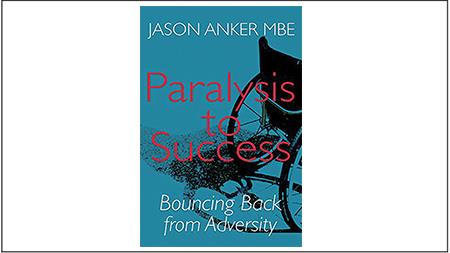 I have been fortunate to hear Jason recount his accident and the impact it had on his life several times. His open and honest account of events engages the attention of those listening and he now works as a leading motivational and behavioural safety speaker.

Jason is seen regularly at high-profile industry events and he has been the figurehead for several safety campaigns, particularly those focusing on work at height.

In 2015 he was awarded an MBE for his services to health and safety in the construction industry.

Jason has now put his life into words in his autobiography Paralysis to Success.

He opens by taking us back to his childhood, living in a pub that his parents owned in Newark, Nottinghamshire. He shares anecdotes of growing up in the 1970s and the challenges of life then.

He talks about his experiences as a young man of finding work, learning to drive, marriage and fatherhood.

It was 1993 when Jason had his accident. He accounts for the time spent in hospital after his fall and the devastating effect it had on his life as he struggled to bring up two young children as a wheelchair user.

Jason hit "rock bottom" in 1995 when an accidental drug overdose left him in a coma. When he awoke he was found to have brain damage, which caused permanent difficulties with his memory and speech. It was this pivotal event that made him recognise the need to change his life.

Jason has approached this book in the same way as he speaks -- straight from the heart. He explains how his state of mind at the time of his accident contributed to his unsafe actions and behaviour.

I should make it clear that this is not a book about safety. However, in understanding the circumstances that led to this life-changing event, readers will be able to recognise that the accident was entirely preventable.

Many employees think that an accident will not happen to them and fail to appreciate the impact one can have on their lives and those closest to them. I am sure that, like Jason's deeply personal talks, his book will inspire many others to take safety seriously and speak up when something feels unsafe.