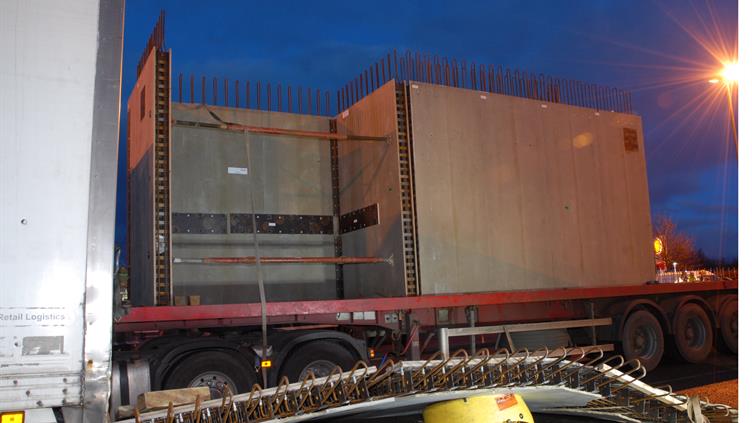 On 11 January 2011 Travis Hale, a lorry driver for Punchards Haulage responsible for transporting four concrete panels to a construction site in Edinburgh, drove away from Hanson Packed Products' yard in Derby with only three vehicle straps securing the load instead of the recommended nine to 18. Hale was killed shortly afterwards when one of the panels fell off the trailer and hit him.

Hanson manufactured the concrete structures and was fined £80,000 plus £37,016 in costs. Punchards and the company who designed the panels, VTK Structures, must each pay £140,000 in addition to costs of £37,016. The panels -- two of which were flat and weighed approximately 1.5 tonnes each -- were components of a stairwell.

Hanson employees had already loaded the trailer (under the direction of a VTK worker) by the time 41-year-old Hale arrived at the yard to collect it. A crane lifted the panels in place and three vehicle straps supplied by Punchards were put over the load to secure it temporarily. The landing legs were lowered and two concrete blocks were in front of the trailer to stop anyone moving it.

"The actual risk to the people in the yard when the loading operation was taking place was low," Health and Safety Executive (HSE) inspector Stuart Parry told IOSH Magazine. "It wasn't posing much of a hazard at all and was really quite low-risk. That is reflected in the lesser charge to Hanson."

While this was the sixth delivery from Hanson's yard to the site in Edinburgh, Hale had not driven any of the previous loads and nor had he visited the Derby site before. "Mr. Hale didn't know much about the load, and that was part of the problem", Parry revealed. "It was up to someone else to put further straps over it -- quite a few more actually -- to make it safe. Hale was kept waiting for a member of VTK to come out and advise him on fitting additional straps but that unfortunately didn't happen and he later left the yard." Highways Agency footage showed Hale driving off with the same three straps over the load.

A Hanson worker noticed Hale leaving the site. The Punchards Staffordshire depot where he was based was alerted and they contacted him on his mobile phone and told him to pull over at the earliest available safe opportunity, at Tibshelf Services on the M1. He had only been on the road for around 30 minutes before pulling into the services, where he waited for two VTK employees to join him. "Mr. Hale was waiting for them to arrive to tell him where to put the extra straps," explained Parry. "This is because, although it was a bulky, heavy product, it is possible to tighten straps too much and deform the edges if pieces of wood aren't in place to protect the concrete."

Once the VTK workers arrived, Hale unfastened an existing strap and the 1.5-tonne panel fell off the trailer and killed him almost instantly.

"Would it have been sensible to put more straps over before you undid any? Yes of course, but that's with hindsight," Parry said. "We can only assume that he didn't realise that particular part of the load was unstable or else he wouldn't have done that."

According to Parry, it was not safe to secure the load using just vehicle straps. Instead, either a toast rack should have been used to support the concrete panels vertically, or an A-frame.

This was first of two fines for Hanson in December. The company was also ordered to pay £750,000 after a worker was drawn into a powered roller and died.