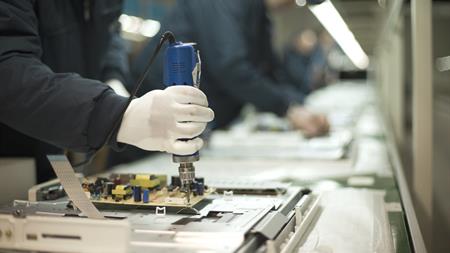 The Chemical Challenge Gap Analysis shows the disparity between industry standards devised by the Electronics Industry Citizenship Coalition (EICC), which comprises more than 100 electronics, retail, auto and toy companies, including Apple, Samsung Electronics and Foxconn, and those set by the GoodElectronics Network, the International Campaign for Responsible Technology (ICRT) and experts from civil society organisations (CSOs).

Last year GoodElectronics, the international network on human rights and sustainability in electronics, and ICRT, which promotes corporate and government accountability, issued a formal challenge to the electronics sector, urging it to implement safer manufacturing practices and to use less hazardous chemicals. They said that workers on the electronics assembly lines that are exposed to toxic substances are at greater risk of developing cancer and other health problems, and suffering miscarriages.

Meeting the Challenge was published in March 2015 and set out their benchmarks for safe and sustainable practice. It contained recommendations for safe production methods and highlighted six areas the industry should address: transparency, use of safer chemicals, protection of workers, participation of workers and communities, protection of communities and the environment, and compensation and remediation.

The new gap analysis is made up of two assessments: EICC's self-assessment (which compared its code of conduct and validated audit process (VAP) protocol with the recommendations that GoodElectronics and ICRT set out in the Meeting the Challenge document); and the CSO assessment (GoodElectronics, ICRT and experts' evaluation of the robustness of the same EICC code of conduct and VAP protocol as compared with Meeting the Challenge).

In every instance, either both parties agreed that the extent of the gap was large, or the results of the industry's self-assessment fell below CSO expectations. "EICC paints a rosier picture of where the industry stands compared to the NGO benchmark," GoodElectronics and ICRT said.

For example, asked whether suppliers provide full health and safety information to workers, the EICC indicated that its requirements and CSO expectations were aligned, while the CSO score showed there were considerable gaps.

The question "Are suppliers required to ensure no harm to workers due to exposure to low level or multiple chemicals?" revealed that EICC believed there was a low gap. According to GoodElectroncs and ICRT's score, however, there was a large gap.

The EICC claims it is committed to supporting the wellbeing of workers around the world that are affected by the global electronics supply chain. But GoodElectronics and ICRT said: "The question is whether the efforts made by EICC and its member companies are enough. The short but clear answer is that they are not."

They added that the gap analysis "demonstrates how far the standards and tools developed by EICC fall short of the expectations set by [CSOs] and experts in the field of occupational health and safety and industrial hygiene".

GoodElectronics, ICRT and EICC and the members of its Chemical Management Working Group will further discuss the gap analysis early next year.

Alejandro Gonzalez from GoodElectronics said: "We call on the electronics industry to proactively reduce and eliminate human rights violations associated with the use of process chemicals in the manufacturing of electronics products and components.

"In the upcoming discussions, the objective will be to agree on specific priority areas to be improved and then define a roadmap leading to concrete changes in the entire electronics industry. Some of the potential focus areas include public disclosure of names and addresses of all suppliers, policies and contract clauses guaranteeing the right to collective bargaining, and policing ensuring suppliers provide fair compensation to workers."

Almost 350 people have signed a petition for technology brands to implement the challenge that GoodElectronics and ICRT issued to the industry. It needs 500 signatories before it can be delivered to EICC, Apple, Samsung and Foxconn.