One dead and five injured in Didcot power station collapse 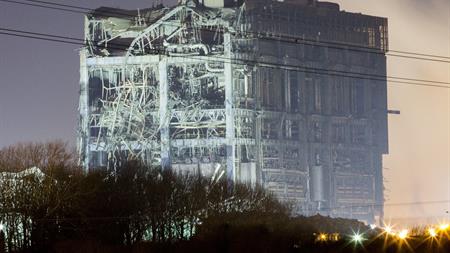 Fire and rescue services are searching the site for three people who are still missing after part of the 10 storey former boiler house collapsed at about 4pm. Five people, believed to be demolition workers, were taken by ambulance to Oxford's John Radcliffe Hospital; one is reported to have serious injuries but to be in a stable condition. The fire service is using sniffer dogs and unmanned aerial vehicles to search for the three people who are still missing.

Oxfordshire County Council said the search operation is hampered by the condition of the part of the boiler house that is still standing, which it described as "very unstable".

A spokesperson for HSE said: "HSE inspectors are on site at the Didcot A Power station in Oxfordshire, following the major incident on Tuesday 23 February. HSE are presently assisting the police and the emergency services."

The Didcot A coal-fired station operated between 1970 and 2013 employing 10,000 at its peak. A controlled demolition of three of the cooling towers took place in July 2014 and demolition of the remaining structures was due to be complete by the end of 2016.

"Detailed designs for various aspects of the project were carried out," says the company's project description. "These included explosive engineering, structural calculations and temporary works design -¦ All safe systems of work to include method statements, risk assessments, traffic management plan etc, along with project control documentation was developed ready for project implementation."

A statement from RWE NPower said: "Our thoughts are with the families of all those involved in this tragedy. We will provide updates as we receive them. We are working with the emergency services who are currently on site to understand the cause of this collapse."