Office wellbeing: A desk with a view 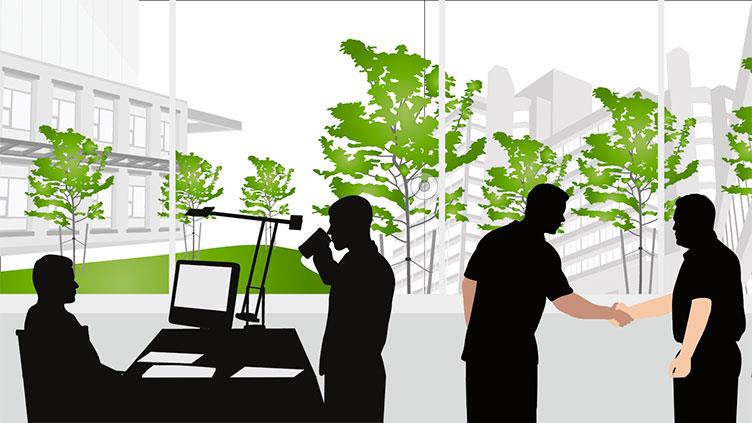 Safety and health professionals are familiar from the Health and Safety Executive's Stress Management Standards with the idea that poor working conditions such as long hours, overbearing managers and a lack of task control can raise stress and absence levels. What is less well recognised, however, is that the way the workplace itself can affect employees' fitness, mental health and wellbeing.

According to the Leesman Index, the world's largest collection of workspace effectiveness data, many employees are dissatisfied with the temperature in their workplaces (73% of the 110,000 workers in the database), noise levels (71%), air quality (67%) and levels of natural light (43%). They are also unhappy with the layout of their offices, in particular a lack of meeting space (54%) and inadequate room for reading (42%) or thinking (49%). The result is stressed, distracted employees who neither communicate properly with colleagues nor concentrate when they need to. This in turn affects organisational performance; only 54% of employees surveyed agreed that their workplace allows them to work productively.

Chris Moriarty, Leesman's development director, says the workplace is crucial for social cohesion and organisations need to do more to provide areas for people to come together and relax. "There has been a lot of talk about the 'sitting crisis', but still so many workplaces are designed around the idea of sitting in one place for the day," he says. "A variety of workspaces has been proven to have an impact on workplace effectiveness but it will also mean that your staff are walking around more, which comes with many health benefits."

The link between a poor working environment and mental health problems was highlighted during national Time to Talk day on 4 February, organised by the charities Mind and Rethink Mental Illness. Kathleen Miles, Mind's director of fundraising, commented: "Lighting, temperature and noise levels all affect our wellbeing and, as such, employees are more likely to perform at their best in ambient workspaces, with lots of natural light and ventilation." 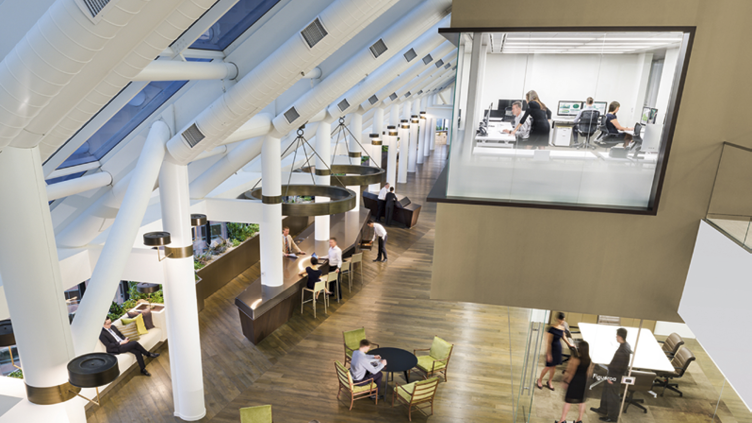 To mark the day, office interior designer firm Peldon Rose, which has chosen Mind as its partner charity for 2016, drew up a five-point plan to help employers reduce workplace-related stress and promote employee wellness. The tips are based on a survey of 1,000 office workers in the UK and on the firm's experience designing offices for leading organisations such as JustGiving, Friends of the Earth and Google.

The belief that the workplace should promote health and wellbeing is behind a certification scheme launched in October 2014 by the US-based International WELL Building Institute (IWBA). Under the WELL Building Standard (www.wellcertified.com), newly constructed and existing offices can be awarded silver, gold or platinum certification depending on how effectively they support occupants' wellness. There are also pilot schemes for other types of building, including educational and retail premises.

"Our built environment shapes our habits and choices, regulates our sleep-wake cycle, drives us toward healthy and unhealthy choices, and passively influences our health through the quality of our surroundings," says the IWBI's founder, Paul Scialla, who points out that office workers spend 90% of their time indoors.

Scialla is also founder of Delos, a property developer that created the world's first WELL Certified building, the Los Angeles headquarters of property company CBRE. To ensure independence, certification is carried out by a third party, Green Business Certification, which administers the longstanding US green building assessment scheme, LEED (Leadership in Energy and Environmental Design).

One of the concepts underlying the design of the CBRE office is biophilia or humans' innate love of nature. "When we spend our time in lifeless settings our mental health and wellbeing is diminished," claims a paper on the project published by CBRE and Delos. The building contains more than 1,000 plants, as well as connecting employees to the natural environment through views and daylight.

Materials, products and finishes contain no or minimal volatile organic compounds (VOCs). An advanced filtration system achieves 100% air purification, which reduces allergens, particulates, bioaerosols, toxins and filters external VOCs. The aim is to cut fatigue, the spread of viruses and pathogens and the risk of respiratory ailments such as asthma. Plants are also used to filter out residual VOCs and CO2.

Employees share sit/stand desks, so work surfaces are treated with an anti-microbial treatment and janitors use UV lights every night to kill germs and reduce the risk of infections spreading. Since this is California, they can even run on treadmills at desks if they wish.

Water filters reduce impurities, including disinfectant by-products, pesticides, chlorine and some pharmaceutical products. There are "hydration stations" every 30 m and signs reminding staff to drink plenty of liquids. Food served in the building is low calorie and contains low levels of sugar, trans-fats, and polyunsaturated fats. Employees are sent a "well tip of the day"; they are encouraged to use an electronic library of health research and periodicals and a wellness concierge gives them health guidance. Each floor has an exercise and stretching zone.

CBRE is now applying the principles behind the Los Angeles showcase office across its estate; new designs have been introduced recently at two of its London sites, and in its offices in Warsaw, Amsterdam, Madrid, Prague and Chicago.

In the UK, developer Lendlease is creating a new business district in London's Stratford that it claims puts health and wellbeing at its core. The International Quarter incorporates 330 homes and more than 350,000 sq m of offices designed to accommodate 25,000 employees. It has three acres of squares and parkland (Wifi-enabled for outdoor working), plus the sports facilities of the Queen Elizabeth Olympic Park on its doorstep, including 8 km of mountain bike trails. The offices maximise natural light, offer views over the park and advanced temperature control, and they eliminate materials that leach VOCs and purify the air. To encourage occupants to be more mobile, there are open staircases which people will have to pass to reach the lifts, as well as showers, lockers and bike storage.

Both the LA and Stratford offices sound like pleasant places to work (if a little over-zealous in the US case) but most evidence put forward that such environments improve employee health and performance is based on workers' perceptions.

In a survey of CBRE's employees, 92% said the new space had had a positive effect on their health and wellbeing. In addition, 83% reported feeling more productive, 93% said they could collaborate more easily with others and 94% perceived a positive impact on business performance.

CBRE and developer Delos admit more study is required to understand which improvements have the most impact and how much benefit they bring. They expect to see reduced absenteeism, improved retention and happier employees and will be studying these metrics over the coming years to track progress. 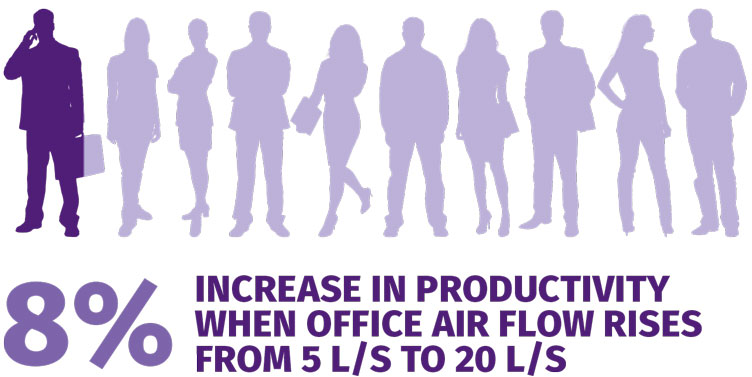 Since salaries and benefits are typically responsible for 90% of an organisation's expenditure, the World GBC argues that even small improvements in staff performance will far outweigh the investment in healthier workplaces. According to its chief executive Jane Henley: "The evidence linking good office design and improved health, wellbeing and productivity of staff is now overwhelming. There is unquestionably a clear business case for investing in, developing and occupying healthier, greener buildings.

"Most businesses are already sitting on a treasure trove of information that can have an immediate impact on their two biggest expenses: people and buildings," she says. "Understanding the relationship between the two can help businesses achieve significant competitive advantage."

That trove includes information on staff absenteeism, turnover and medical complaints in different departments or buildings. Staff surveys are an obvious way to measure perceived stressors and satisfaction with the working environment and the report includes suggested questions for such polls.

Another tool that will become increasingly popular, the World GBC suggests, is portable and wearable sensors that will enable organisations to measure employees' heart rate and brain activity as they react to office environments.

A report by US consultancy Terrapin Bright Green, The Economics of Biophilia, rounds up international research into the benefits of providing employees with plants, natural views, daylight and artwork or design features that reflect or mimic nature.

One of the most compelling studies is a 1984 investigation into why some hospital patients recovered faster than others after invasive surgery. The only variable was that half the patients looked out at a brick wall, while the other half had a view of a clump of trees and shrubs. The first group took 8.3 days on average to recover, while the group with a view took 7.4 days. They also called the nurses half as often and required fewer painkillers.

In another study at a Sacramento, California, call centre, desks which had been perpendicular to the windows were angled to let employees to see trees in their peripheral vision. This required slightly more floorspace, which together with some construction work cost about $1,000 (£716) per desk. "The return on that was a 6% increase in call processing," says Terrapin consultant Bill Browning. "It was about a $2,990 [£2,142] annual return per workstation."

Even if you have no view to offer, you can create one by installing a green wall with a variety of plants, Browning suggests, pointing out that "biodiversity is more important than size". He also recommends indoor water features, which have the added benefit of masking noise in open-plan areas.

But perhaps the quickest and cheapest way to reap the benefits of biophilia -- albeit not the most effective -- is to install artworks showing natural scenes. Browning cites a 2008 study in which office workers were put in a room with closed curtains, with a garden view or with a flat-screen TV with the same dimensions and view as the window. After they received a stressor, the blood pressure and heart rate of those volunteers with the real view dropped the fastest and lowest, followed by those with the simulated view. "Both real nature and representations of nature suffice," Browning explains, but "real is better."