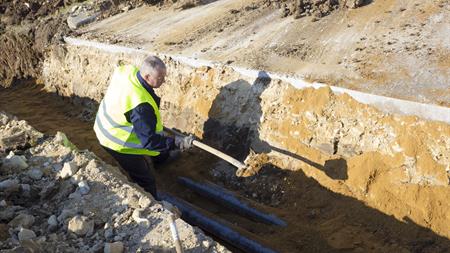 The construction safety organisation said there were 408 excavation work breaches in 2017, marking a 7% rise compared with the previous year when 382 breaches were reported.

BSG conducted around 11,000 independent inspections for the construction industry over six months. It found a 16% increase in the number of violations between the third and fourth quarters of 2017, from 94 to 109.

Its figures show this was the highest rise compared with previous months. The group reported 111 excavation breaches in the first three months of 2017, up 5% from 106 in the fourth quarter of 2016.

Instances in the second quarter dropped 15% to 94, with the same number recorded in the following three-month period.

"Without suitable support, any face of an excavation will collapse; it's just a matter of when. The steeper and deeper the face and the wetter the soil, the sooner the collapse."

He added: "Trenchless technologies are available which will help to avoid many of the hazards of excavation, but if a trench is required [then] modern, approved systems can allow the ground support to be installed without the need to enter the excavation."

Last year the director of housing developer Conquest Homes was jailed for gross negligence manslaughter after a ground worker was crushed to death in a building site trench.

The Health and Safety Executive advises that construction managers must ensure that excavations are made safe by setting up trench supports, battering back, fencing or other equally effective measures. It says that companies should also provide training for staff, highlighting the risks of excavation work. In addition, weekly trench inspections should take place, particularly after bad weather.