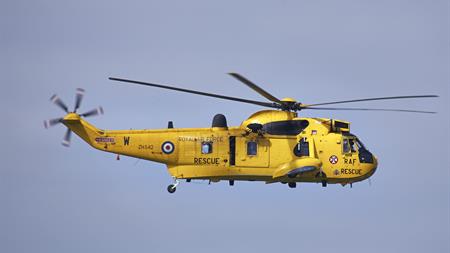 Last year it was revealed that asbestos-containing material was used in 90 of the helicopters' components, including seals and gaskets, which may have affected an estimated 1,000 workers who carried out aircraft maintenance between 1969 and 2018, when it was decommissioned.
Since then Unite said it has been campaigning for the MoD to inform workers they could have come into contact with the hazardous material.
However, the MoD said it did not have a "central record" of those who carried out maintenance work and much of it was undertaken by contractors rather than by its employees.
Unite national officer Jim Kennedy said: "It is simply not credible to believe that the MoD does not have records of the workers who operated on military bases."
According to the MoD, "major contaminated components" on the Sea King fleet had been replaced by 2006, with remaining items assessed as "low risk" and contained inside components that were not often taken apart. These were replaced with asbestos-free alternatives "when routine maintenance allowed", it said.
However, last year an investigation found that the MoD's supply chain "had not been purged of asbestos components" when a routine maintenance training activity on a retired Sea King airframe found presence of the material in an exhaust panel seal.
Action was then taken to remove these components from the supply chain.
A spokesperson for the MoD told Forces News: "We have been completely transparent throughout this process and have published comprehensive information for those who may have been exposed in the past, detailing the actions they should take."
The union has called on the MoD to: identify all current employees who may have been exposed to asbestos; offer follow-up counselling or access to medical checks for current and former employees; and notify all former MoD employees who may have had contact with the Sea King helicopters.
Topics
Asbestos
Sector: Central government
Transport and logistics
News