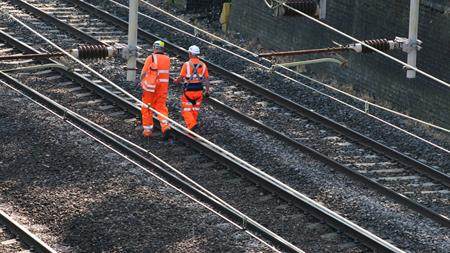 Last year there were 1.71 billion passenger journeys. This is the first decline for many years, although it still represents a near-peak figure, and the last fatality occurred in a train derailment at Grayrigg in Cumbria in February 2007.

Ann Mills, RSSB's head of health and safety, said: "Despite these improvements, it's worth stressing that the risk from train accidents has not been eliminated."

In total, there was one worker fatality and 164 major injuries to the workforce, as well as 5,694 minor injuries and 803 cases of shock or trauma last year.

The overall level of workforce harm for 2017-18, which the RSSB measures as "fatalities and weighted injuries" (FWI) was 26.4, a slight increase on the 26.3 FWI score the previous year. Over the past decade, the average level of harm to workers has been 28.1 FWI per year.

FWI is the common way of measuring harm to people on Britain's railways and is achieved by weighting a number of less serious incidents to make them "equal" to one fatality. For instance, one fatality equates to ten major injuries, which is equal to 200 minor injuries where the injured person is taken to hospital.

Though no one died in train accidents in 2017-18, a train maintenance worker was killed at Old Oak Common depot in north London on 13 June 2017 when a 650kg electric motor fell on him.

Injuries in yards, depots and sidings (YDS) have largely remained flat over the past ten years. The total level of workforce physical harm in YDS during 2017-18 was 7.2 FWI. This is an increase on the previous year's score of 5.6 FWI, which was a ten-year low. Since 2008-09, harm in YDS has accounted for around 19% of the total harm to the workforce, the RSSB said.

For infrastructure workers -- those who work on or near the running line -- the total level of harm during 2017-18 was 8 FWI. This is a 16% decrease compared with 9.5 FWI the previous year. In total there were 57 major injuries, 1,443 minor injuries and four cases of shock/trauma.

Though no members of the infrastructure workforce have been killed in the last four years while carrying out jobs on or about the running line, injuries are still occurring and near-miss occurrences are increasing.

"This is work the Infrastructure Safety Leadership Group is addressing through its own programme," said Mills. "There are issues out there, for example situations where trains are wrongly signaled into possessions [restricted areas], and the number of near-misses is going up."

The number of train accidents with the most potential to result in serious consequences, known as "potentially higher-risk train accidents" (PHRATAs), dropped to its second lowest level for the past ten years (19); three less than the previous year.

These were nine collisions with road vehicles at level crossings, seven derailments, one collision between trains and two buffer-stop collisions. This figure has not been lower since 2010/11 when there were 18 such accidents.

Fatigue is a factor in 20% of high-risk accidents, said Mills.

The figures also show that the number of assaults on the workforce leading to injury or shock/trauma increased by 6% in 2017-18 to the highest level in six years. The RSSB notes that "this appears to be driven by a 44% increase in harmful assaults towards station staff since last year".

"Research is also showing that staff wearing body-worn cameras suffer less abuse and fewer assaults. Interestingly, this extends to other staff who don't wear cameras but work in the same location as those that do."

The Office of Rail and Road's 2017-18 rail safety statistics are expected to be published next month.