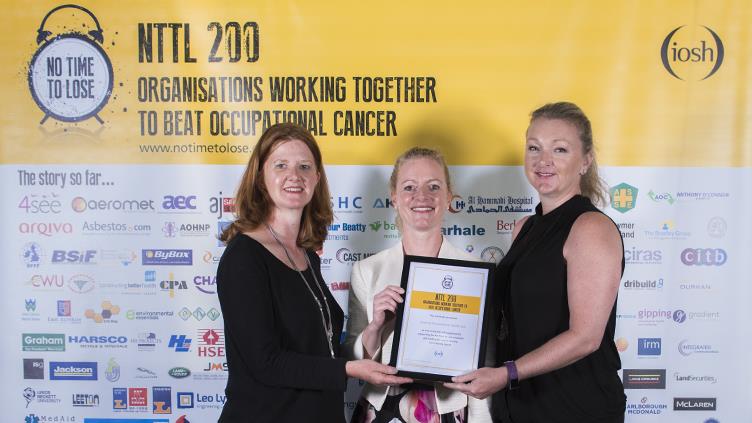 NTTL 200 - organisations working together to beat occupational cancer - was organised to mark the No Time to Lose campaign gaining 200 supporters worldwide, of which 100 have taken their support even further by pledging to prevent work cancer through designing and implementing new strategies.

Over 50 health and safety and communication professionals from supporting organisations attended the event, held on Wednesday 21 June, where they received an update on the campaign and suggestions about how to help spread the message and encourage the next wave of supporters to get involved.

Research suggests cancer caused by work claims at least 666,000 lives a year worldwide -- one death every 47 seconds. In Britain alone, it is estimated that around 8,000 people die annually from this dreadful disease.

IOSH launched the No Time to Lose campaign in November 2014 to raise awareness of occupational cancer and help businesses take action by providing free practical resources.

Shelley Frost, IOSH Executive Director of Policy said: "The NTTL 200 event was an event of celebration and thanks to all of our 200 supporters and pledge signatories that have really followed us along our journey.

"They definitely had a great evening sharing their own experiences and journeys and how they've really helped influence and improve occupational health across their workforce and through their supply chains.

"Also, importantly, it's really a focus on getting the next 200 supporters and pledgers, so we've shared our communications information and engaged the communications professionals to help us spread the word more widely across their networks."

At the event, supporting organisations explained how they have been managing exposure to carcinogens such as diesel fumes, solar radiation and silica dust in the workplace.

Waste management company, MTS Cleansing Services Ltd, has put in place a range of initiatives to reduce diesel fumes exposure. Keith Hole, Head of SHEQW at MTS said: "Through focused modernisation of our fleet, locating vehicles proactively to reduce emissions and making upgrades to the ventilation in the workshops, we have reduced the risk to all our staff and customers from exposure to diesel fumes.

"We signed up to the No Time to Lose campaign because we care about the health, safety and wellbeing of our staff. It's the right thing to do, and ultimately it makes us more efficient as a business."

Simon Toseland, SHEQ Director at Norse, a facilities management provider, explained how the company is managing solar radiation at work. He said: "Initially we undertook an exercise where we identified those operations where our people are at risk from solar radiation. We then prepared and rolled out an awareness initiative on the dangers and the controls.

"We found the No Time to Lose resources produced by IOSH extremely beneficial. As many of our outdoor workers do not have access to the internet, we relied on the posters and information cards as a key communication tool. IOSH were happy to brand these with our Norse logo, which made it very personal and helped to reinforce our commitment.

"As part of this campaign we are providing operatives with long sleeved tops, hats and glasses so that they can stay covered up."

Keith said: "Having identified that there is a concern we set about raising awareness of the issue. We have an internal working group for ballast dust that has produced posters and information. Network Rail has created a dedicated website called 'Safety Central' to help highlight safety and health issues, including silica dust. We have also worked with IOSH to dual brand the No Time to Lose campaign's silica pack which we display in prominent places, and is also available on the website.

"We are advising all projects to ensure operators drop wet ballast at a low level and wear gloves and a mask -- we're getting better and we will continue to work with IOSH to help make a better Britain."

The Considerate Constructors Scheme's Victoria Knowles, Head of Public Relations, showcased how her organisation partnered up with IOSH's No Time to Lose campaign to help raise awareness of ultraviolet radiation at construction sites across the UK.

She said: "The No Time to Lose campaign is an excellent way to highlight the risks of occupational cancers to the construction industry's workforce.

"In conjunction with IOSH, the Considerate Constructors Scheme has produced a number of practical resources available via the Scheme's Best Practice Hub. The resources include a 'Spotlight on-¦occupational cancers', site posters, best practice guidance and case studies of how the industry is working together to minimise these risks.

"The Scheme looks forward to continuing to partner with IOSH to help support this important campaign."

Finally, IOSH certificates were given to supporters recognising them as the first 200 organisations supporting the No Time to Lose campaign and leading the way in tackling work-related cancer.

Shelley Frost from IOSH concluded that: "In terms of the next steps, we'd really like our supporters and pledgers to spread the word by working with their communications team to get the message out, and we'd like to see more examples of organisations using the No Time to Lose campaign around the world."

To find out more about the NTTL 200 -- organisations working together to beat occupational cancer event -- watch our film.

To get involved in the No Time to Lose campaign, visit www.notimetolose.org.uk