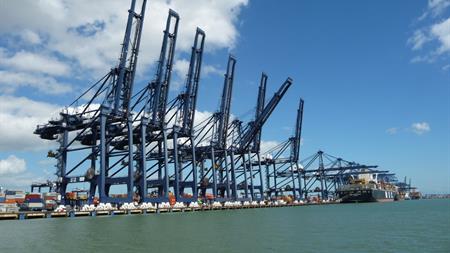 Gary Louis, 58, was carrying out works to upgrade a container handling facility at the Port of Felixstowe, Suffolk, in 2015 when the hose suddenly swung round and fatally struck him.
The prosecution was brought following an investigation by the Health and Safety Executive (HSE), which found RW Hill (Felixstowe) had failed to implement a danger zone around the hose.
The company pleaded guilty to breaching regs 15(2) and 15(8) of the Construction (Design and Management) 2015. It was fined £15,000 and ordered to pay costs of more than £13,880 at Chelmsford Magistrates' Court on 24 May.
The court was told that RW Hill was the main contractor on the project to replace the roadway on berth 7 at the port's Trinity Terminal. Two specialist companies had been subcontracted to pump and lay the concrete respectively.
On 7 August 2015 the flexible delivery hose that was being used to pump concrete became momentarily blocked, then cleared under pressure, causing the pump to violently whip round, the HSE said.
Louis, who was employed by the concrete laying subcontractor, was killed and another worker sustained cuts and bruising.
The HSE's investigation found that RW Hill had failed to enforce an exclusion zone around the flexible delivery hose.
It found the company did not adequately supervise, instruct nor provide suitable information to subcontractors, and failed to monitor the pumping operations to ensure the ongoing safety of workers.
HSE inspector Glyn Davies said: "This tragic incident could easily have been prevented had the company involved acted to identify and manage the well-documented risks involved in concrete pumping by the implementation of suitable safe systems of work.
"As this case sadly demonstrates, poorly managed concrete pumping operations can and do kill construction workers when industry safety guidance is not followed."
In 2013 the HSE and the Construction Plant-hire Association published updated guidance on the safe use of concrete pumps following an increase in the number of accidents.
The Code of Practice for the Safe Use of Concrete Pumps states that the diameter of the danger zone around a delivery hose should be "twice the length" of the hose itself.
"Until concrete is flowing smoothly out of the end of the delivery hose, or when a blockage occurs in the boom pipeline, all personnel should remain clear of the delivery hose and the placing boom," it says.
Topics
Safe systems of work
Construction
News