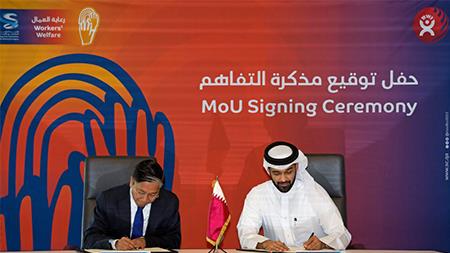 A memorandum of understanding has been signed between the Building and Wood Workers' International (BWI) and the Qatari Supreme Committee for Delivery & Legacy.

The agreement, signed in the Qatari capital Doha, allows joint inspections of construction sites and workers' accommodation from January. It covers World Cup projects built by companies headquartered in countries where BWI operates. These are Austria, Belgium, Cyprus, India and Italy.

Six Construct, owned by Belgium's Besix construction group, is one of the joint partners renovating the Khalifa International Stadium for the 2022 tournament.

Treatment of migrant workers by subcontractors on the Khalifa project was criticised by Amnesty International in a report [www.ioshmagazine.com/article/qatar-still-permitting-workers-abuse-says-amnesty] published in April. It claimed workers were forced to pay incorrect recruitment fees and had their passports withheld. Accommodation in camps managed by Malaysian subcontractor Eversendai for workers on other Qatar World Cup projects appeared to have no fire alarm systems or extinguishers.

Previous reports by unions and non-governmental organisations have criticised safety standards on the projects.

Under the memorandum, BWI will also conduct health and safety training for the Supreme Committee and its contractors working on projects that fall under the agreement.

The union will form a joint working group with the committee to manage the inspections and reporting obligations. The group will meet periodically to review progress and issue a public report after every meeting.

The Supreme Committee is client for eight construction sites with around 10,000 workers, mostly from Nepal, India and Bangladesh. This number is expected to rise to 36,000 in the next 12 months as many of the projects approach completion or the main works stage.

BWI general secretary Ambet Yuson called the memorandum "an important step to build on the mechanisms currently in place which ensure workers' safety on projects directly related to the 2022 Fifa World Cup".