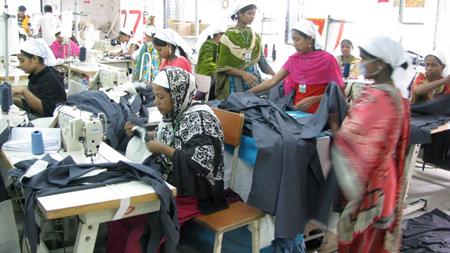 The project, called OHS (Occupational Health and Safety) Initiative for Workers and Communities, will see 75 people trained to deliver workshops in Dhaka in its garment, construction, ship-breaking and other similar industries.

IOSH, the World Solidarity Movement (WSM) in Belgium, the National Fire Association (NFPA) in the USA, LUSH Cosmetics "Charity Pot" in Canada, and a group of anonymous donors in San Francisco, California, have provided a total in excess of $53,000 (£42,690) for the first year of the project. Fundraising will continue for the second and third years.

Once hired, they will begin developing curriculum and materials. The trainers will undergo a programme including skill-building courses on techniques for conducting effective courses with workers who have limited formal education.

The Occupational Safety, Health and Environment (OSHE) Foundation in Dhaka is serving as the secretariat of the project, whose offices will be based in the same building as OSHE in the Mirpur District of Dhaka.

Garrett Brown, Coordinator at the California Collaborative and a project board member, said: "One of the biggest challenges in Bangladesh is to overcome the lack of awareness and knowledge of occupational health and safety concepts and issues, especially at the grassroots level. This project is a small but important first step towards building the capacity of workers and their organisations to play their essential role in effective factory health and safety.

"IOSH is to be congratulated for its strong support of this project -- the first organisation to contribute -- and for its longstanding concern about global OHS."

IOSH has been supporting international efforts to help safeguard those working in garment factories, particularly since the collapse of the Rana Plaza factory in Dhaka in 2013, which killed more than 1,100 workers. The institution has backed similar projects on fire safety training as well as working with others on a Parliamentary debate called Ethical Fashion 2020: a new vison for transparency and arranging a webinar titled Effective OSH in global supply chains.

"We think this is a really positive and welcome project, helping to build health and safety capacity in Bangladesh. Overall, the initiative not only has the potential to save lives and prevent injury and illness, but also to support a more sustainable future for workers and communities."