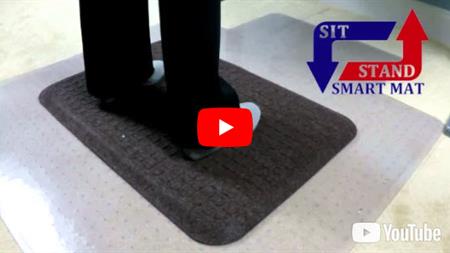 The U.S. Patent Office has issued a Utility Patent for a "Slidable Anti-Fatigue Mat" designed for use with sit-stand desks. The patent, effective January 9, 2018, was issued to John C. Burkhalter, President of OiC Innovations.

"The problem in using anti-fatigue mats with sit-stand desks is that while they're excellent for standing, the mat gets in the way for sitting," according to Burkhalter. "Chairs must either be pushed on top of hard, uncomfortable mats, or users must bend down to floor level to pick up and move the mat. These additional efforts can create or exacerbate back problems and discourage users from changing positions which results in far too much sitting."

The device described is an anti-fatigue mat which can be moved back and forth under a desk with a foot-activated touch point. Light pressure with one foot on the activation spot moves the mat, but heavier foot pressure prevents movement for stability and safety.

The benefits and solutions outlined in the patent describe the features of the company's "Sit-Stand Smart Mat." The product is designed for use on both carpets and hard surfaces, a feat achieved by using different materials for the activation areas. Made in the USA, the mats are customizable to obtain the desired ease of movement on all types of floor surfaces.

"By making it quick and easy to switch between sitting and standing, users cycle back and forth more often, and allows for the use of a soft, comfortable anti-fatigue mat." said Burkhalter. "This leads to an increase in standing time, which enhances the core purpose and value of sit-stand desks. And for the many people who work at a desk, this means a healthier and more productive work environment."

Michael Craggs, CEO of the Micwilll Group and ErgoCanada.com believes "For a sit-stand desk user, this is the only product which doesn't introduce additional risk factors associated with the movement of the mat. It's a uniquely capable sit-stand anti-fatigue mat solution."

OiC experimented with almost 50 mats and materials before finding the right combination of movability, grip, stability and compression. John Fuire, owner of Prime Contract Sales in Huntington Beach, California says "The Sit-Stand SmartMat is an ingenious product because it's so easy to re-position, but at the same time it's not slippery. And it provides tremendous comfort when standing."

OiC Innovations, a subsidiary of E Biz Communications, Inc., was one of the first companies to manufacture a sit-stand desktop for use on existing desks. But that market quickly became saturated as dozens of large companies began producing height-adjustable desks. A privately held company, OiC transitioned to other ergonomic products, such as the Sit-Stand SmartMat, which is now patent-protected in the United States. Patents for the Mat are also pending in 37 other countries.

The company recently added a new manufacturing partner to increase the scale of production, but also plans to explore licensing agreements with other ergonomic organizations.

Please contact OiC Innovations at 1-888-922-2573 or John Burkhalter directly at 404-840-4999 with inquiries. If a confirming reference is desired, the patent publication number / link below can be used to access the application as the patent (#9861220) being issued is new. The patent notice of approval document is also available on request. www.google.com/patents/US20160255977

Watch a short video about the "Slidable Anti-Fatigue Mat" (from www.SitStandSmartMat.com)

Topics:
Ergonomics
Products and services
This content is paid for and not an endorsement from IOSH or IOSH magazine.