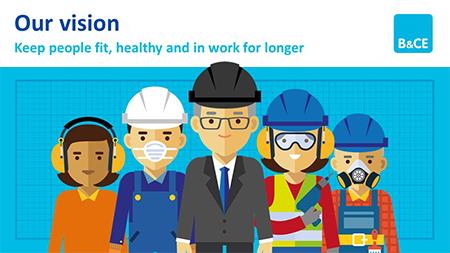 B&CE, the non-profit organisation that operates the UK construction industry's pension scheme, developed the framework in collaboration with an occupational health (OH) steering group made up of employers, OH professionals, regulators and federations. It will form part of its new digital OH management model that aims to detect ill-health effects at an early stage.

The framework covers all construction workers who are regularly exposed to dust, chemicals, noise and vibration -- about 90% of those regularly exposed to physical health hazards in the industry. B&CE said employers that implement the framework will be able to easily identify health hazards and arrange health surveillance, while it will also enable workers to manage their health in the workplace.

At 12-monthly intervals in the first and second year after the baseline appointment, workers would be required to complete an online health surveillance questionnaire to identify any early health changes that could have been caused by work. If health changes were identified, the system would trigger a referral to an OHSP, who could then make recommendations to the employer regarding the provision of suitable support.

In year three the worker would complete a detailed questionnaire and attend an appointment with an OHSP. The three-year cycle would continue until the worker is no longer exposed to health hazards, B&CE explained.

It said that developing the framework is the first step in creating the new scheme, which, based on evidence from the Health and Safety Executive, research and best practice, will lead to a more unified approach to occupational health across construction.

Last November, in response to several queries about why mental health was not included in the framework, B&CE said: "Raising awareness of and improving mental health outcomes is vital for an industry with worrying levels of stress, anxiety and suicide rates. However, there is no one, simple, evidence-based way for OH professionals to assess the many types and forms of mental health conditions.

"We will continue to work with the OH steering group to review developments in this area, and include them when appropriate."

Margaret Grahamslaw, head of occupational health at B&CE, said: "Last year we consulted with the industry, who agreed with the framework's approach.

"Occupational health professionals asked us for more information about the estimated 10% of construction workers who may show early signs of work-related illness or are exposed to specific hazards such as asbestos and lead. We have been engaging with them about those specific clinical elements and we've added these to the framework to cover those workers."

In 2016 B&CE acquired and took over the running of the industry's current OH management scheme, Constructing Better Health (CBH). It said it "quickly realised it wasn't working", and is now building a digital model "that workers will be able to carry around with them from site to site and job to job, giving them a better oversight of their work-related health".

CBH was established in 2004 to offer contractors access to OH services such as health surveillance. The scheme had around 340 employers signed up, but critics said it struggled to gain traction.