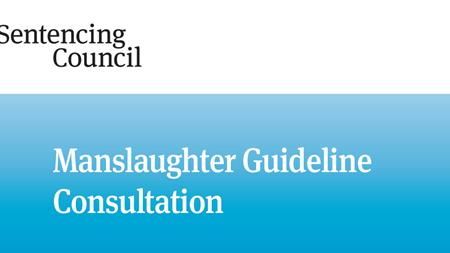 Today (4 July) the independent body responsible for developing sentencing guidelines for the courts has announced a consultation on its proposals for how offenders convicted of manslaughter should be sentenced in England and Wales.

The first -- gross negligence -- occurs when the offender breaches their duty of care towards the victim, resulting in death and amounting to a criminal act or omission. In the workplace this covers employers whose long-standing and serious contempt for the safety of workers was motivated by cost-cutting. It could also arise in domestic and medical settings.

The guidance also applies to unlawful act manslaughter, which includes deaths that result from assaults where there was no intention to kill or cause serious harm; manslaughter by reason of loss of control, which arises if the action of an offender, who would otherwise be guilty of murder, resulted from a loss of self-control; and manslaughter by reason of diminished responsibility, when the offender would have been suffering from a mental condition.

Under the draft guideline for sentencing gross negligence manslaughter, the court would have to decide the offence category by determining the level of culpability and the harm caused. Currently, these cases carry a minimum one-year prison sentence. However, the Sentencing Council is proposing that, if the offender's culpability is deemed to be the result of a lapse in otherwise satisfactory standards of care, the jail term should be in the range of one to four years (see table below).

Evidence that the negligent conduct persisted for a long period of time should result in a jail sentence between six and 12 years under the proposals, while an employer that had a long standing, utter disregard for the safety of employees and was motivated by financial gain (or avoidance of cost) should expect a prison sentence between ten and 18 years.

Step two: starting point and category range for a single offence of manslaughter resulting in a single fatality-

The council said sentences for gross negligence manslaughter were lower than other types of manslaughter. It added: "The introduction of guidelines will be particularly useful in promoting consistency in sentencing and transparency in terms of how sentencing decisions are reached."

The consultation document highlights that 16 offenders were sentenced for manslaughter by gross negligence in 2014. All were handed custodial sentences that ranged from nine months to 12 years; four were suspended. The median sentence length was four years.

By comparison, 104 of the 107 offenders sentenced to unlawful act manslaughter in the same year received custodial terms ranging from two to 24 years (the median was eight years, six months). Two were sentenced to life imprisonment and one was made subject to a hospital order.

All nine offenders sentenced for manslaughter by reason of loss of control in 2014 were handed determinate custodial sentences in the range of four years and six months to 18 years, with a median sentence length of ten years. And six of the 23 offenders sentenced for manslaughter by reason of diminished responsibility received determinate sentences (one suspended), from 18 months to 25 years. Three were sentenced to life imprisonment.

There are no existing guidelines for any other forms of manslaughter except corporate manslaughter, which is covered by the Sentencing Council's health and safety offences guideline.

Sentencing Council member Mr Justice Holroyde said: "Manslaughter always involves the loss of a human life and no sentence can make up for that loss. In developing these guidelines, we have been keenly aware of the impact caused by these offences and so the guidelines aim to ensure sentencing that properly reflects both the culpability of the offender and the seriousness of the harm which has been caused."

The consultation is open to everyone until 10 October. Once the consultation exercise is over and the results considered, a final guideline will be published and used by the crown court. It will apply to all offenders aged 18 and over.