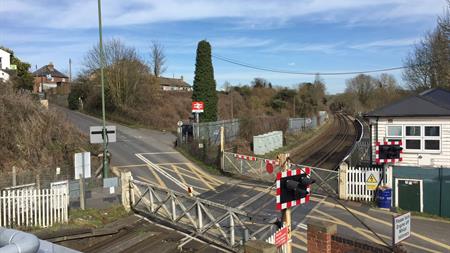 Douglas Caddell sustained severe injuries as he was closing the gate at East Farleigh in Kent on 24 April 2015. Closed-circuit TV footage showed a vehicle striking the gate, causing it to bounce back and knock the 65-year-old to the ground. His injuries included a broken neck.

Caddell's colleagues told Maidstone Crown Court on 11 May that there were frequent incidences of cars swerving across the rail tracks as signallers tried to close the gates. On the day of the incident, Caddell, an experienced signaller, had reported a separate near-miss to the British Transport Police.

The Office of Rail and Road (ORR) investigation found that Network Rail's risk assessment on 24 February, which consisted of only a 30-minute census of traffic use and a conversation with a signaller, incorrectly assessed the risk of deliberate misuse of the crossing as being "significantly lower than average". ORR said it did not constitute a suitable or sufficient risk assessment.

The risk of a driver failing to see that the gates were being closed was foreseeable, the rail regulator also determined. Despite the clear risk, Network Rail had done little or nothing to protect its employees, the ORR added.

Ian Prosser, HM chief inspector of railways, said: "We are pleased that Network Rail has taken safety measures, including installing warning lights, at East Farleigh and we would expect to see proper risk assessments made at the many similar level crossings across the country and necessary safety measures taken."