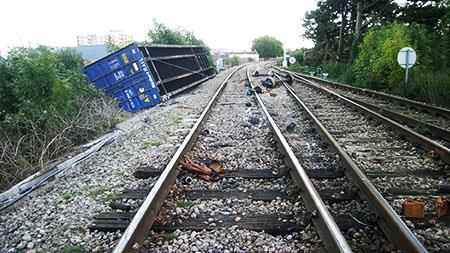 The incident happened at around 8.15pm on 15 October 2013, about 6.4 km south west of Gloucester station on the railway line from Newport via Lydney.

The Direct Rail Services-operated freight train was travelling at 111 kph when the rear wheelset of the last wagon derailed on track that had regularly spaced dips in both rails.

The track defect, known as cyclic top, had formed due to water flowing underneath the track and was the immediate cause of the derailment, the Rail Accident Investigation Branch (RAIB) found. This was accentuated by inadequate drainage.

However, the train driver was unaware of the derailment and continued to Gloucester station where the train was stopped by a signaller, who suspected there was a problem with the train because of damage to its signalling system.

By the time the train had stopped, the rear wagon was badly damaged, the 5.9 tonne empty container it was carrying had dislodged and fallen down an embankment, and there was damage to more than 6 km of track, signalling cables, four level crossings and two bridges.

An investigation found that maintenance workers' short- and medium-term repairs to the cyclic top were ineffective and the planned long-term solution had not been implemented.

In its 2014 accident report, the RAIB said: "The severity of the dips required immediate action by Network Rail, including the imposition of a speed restriction for the trains passing over it, but no such restriction had been put in place. Speed restrictions had repeatedly been imposed since December 2011 but were removed each time repair work was completed; on each occasion, such work subsequently proved to be ineffective."

It made seven recommendations, four of which were directed at Network Rail and covered reviewing the drainage, revising how speed restrictions for cyclic top track defects are managed, providing maintenance staff with a way of measuring cyclic top after completing repairs, and investigating how cyclic top can be effectively repaired.

Tom Wake, head of Network Rail route teams at the Office of Rail and Road, said: "Given Network Rail's failure to remedy this ongoing fault, it was only a matter of time before a derailment took place, creating a genuine risk to passengers and the public.

"In this instance it was extremely fortunate that the loose container did not fall into the path of an oncoming train or cause injury to the public as it fell."