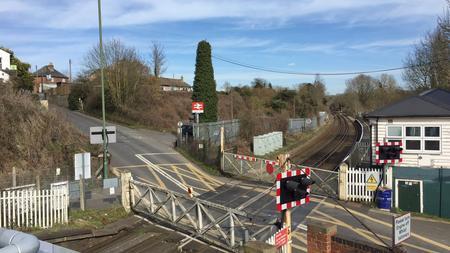 Network Rail has been fined £200,000 and told to pay £86,000 costs after a signalman suffered life-changing injuries at a level crossing.

Douglas Caddell, 65, was closing the gates at the East Farleigh station crossing in Kent when the incident happened on 24 April 2015. There had been a near-miss earlier that day when another vehicle drove over as he was operating the gates.

Caddell sustained a fractured C3 and C4 vertebrae and spondylolisthesis (an injury known as a hangman's fracture) and the possibility of brain injury is being investigated. Caddell is unable to work in his former role.

The Office of Rail and Road (ORR) found that Network Rail's risk assessment was inadequate and that, despite the foreseeable risk of a driver failing to see that the gates were being closed, it did not implement suitable measures to protect employees.

The two level crossing gates, which are closed by the signaller when a train approaches, are fitted with red reflective circular targets and battery-operated lamps. There were no audible warning devices at the time of the incident. The road speed limit leading to and over the crossing is 48 km/h on both approaches.

On 24 April, at around 8.25 am, Caddell was closing the gates when a car drove through. He emailed an incident report to his line manager, Geoffrey Orman, and offered suggestions to make the crossing safer. Caddell also notified the British Transport Police and wrote a statement. He described the incidents as sporadic: they occurred two or three times a day then did not occur for a few weeks. This was the first time he had reported a near-miss. The other signallers working at the station confirmed they were a common occurrence.

Another signaller, Colin Webber, said there had been many occasions when cars had swerved around him while he was closing the gates. Before the incident, he did not report them as it almost became "an acceptable part of the job". Webber added he had not been told to report near-misses before the incident.

At around 1.25pm, when a train appeared on the signaller's indicators, Caddell followed the normal sequence, leaving the signal box to close the gates.

Closed-circuit TV footage from the nearby Victory Pub, which was played in court, showed that a vehicle drove on to the crossing and struck the gate, which bounced back, striking the signaler and knocking him to the ground.

The ORR found that Darrell Adams, the level crossing manager for East Farleigh, conducted inspections every three months. He spoke to the signallers when they came out to close the gates and had received no complaints about drivers trying to force their way across.

Adams also had to carry out an assessment of the crossing every two years. His last assessment on 24 February 2014 was carried out using Network Rail's all level crossing risk management (ALCRM) process.

One of its tick box questions asked if there had been any user abuse over the past year. The question, which only permitted a "yes" or "no" answer, could be taken from the system or by asking the signaler who should have recorded incidents in a signal book.

Adams said that he always made a point of speaking with the signallers although this was not an ALCRM requirement. However, the form did not allow for assessor opinion or recommendations to be made about crossings. Its risk ranking process used a collective risk tool. Individual risks were assessed on a scale from A-M, while collective risks were scored 1-13. A high-risk crossing would be scored as A1 and a low risk as M13.

On 24 February 2014, Adams conducted a 30-minute "census" of traffic use and concluded the traffic flow had not changed significantly during his time visiting East Farleigh. A greater concern was heavy goods vehicles getting stuck. Signallers did not report any misuse and Adams did not observe any. In the "deliberate misuse" section, the chance of a vehicle user deliberately abusing the crossing was estimated as "significantly lower than average". The system produced a score of H7.

After the incident, Adams conducted another assessment on 27 April 2015, producing a H4 score. The ORR said that a comparison of the combined risk results for the two assessments suggested an error was made in the first assessment.

The ORR argued the ALCRM system should calculate an estimated daily usage figure based on the census. This did not appear to happen in February 2014, which explained why a lower risk score was produced.

Network Rail said that the immediate cause of the incident was the failure of the car driver to stop while the signaler was closing the gate. The driver was due to be prosecuted by the police and a date for the hearing had been set but the driver died before it took place.

However, an expert report by Michelle Travers, HM principal inspector of railways, concluded that Network Rail, in carrying out a suitable and sufficient risk assessment that identifies all the risks at the crossing for each type of user, should have considered all possibilities. These included "deliberate misuse and foreseeable human error; design the crossing to eliminate risk where reasonably practicable; and implement control measures to minimise the risks".

The ORR argued that ALCRM is a risk modelling tool and did not constitute a suitable and sufficient risk assessment. It should also include qualitative data such as information from users, elements not currently on the ALCRM data collection form, and the overall professional judgment of the assessor.

The rail regulator also said that risks to the signallers operating the gates should have been included in the risk assessment. The risk that drivers would fail to stop as the gates were being closed was well known to the network operator.

The ORR added that East Farleigh was assessed by Network Rail using ALCRM after the incident as "being among the higher-risk MCG crossings in their infrastructure. It had high vehicle use compared to average levels of use across the population of MCG crossings".