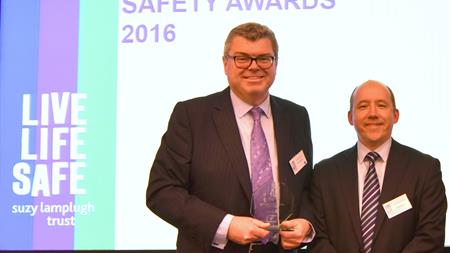 Richard, who is Bovis Homes Group customer and sales service director, was presented with the award at Suzy Lamplugh Trust National Personal Safety Awards in London.

The Personal Safety Champion award was for the individual who best facilitated the improvement of safety for employees in the workplace, especially for those employees who work alone. There were eight other categories including Safer Community, Safer Workplace, Campus Safety, Young Person's Safety and Best Safety Campaign. Among the other winners were Manchester Mind, Voice 4 Victims and Andrew Page Group.

Peoplesafe's managing director, Ian Johannessen, said: "The standard of entries was very high, which was fantastic to see, as it shows that people do take personal safety very seriously.

"And the work done by people like Richard at Bovis Homes demonstrates that personal safety for lone workers can't just be a box-ticking exercise. It's not just a case of giving staff equipment, somebody needs to champion the cause and really care about lone worker safety."

Richard's entry outlined how he introduced a robust lone working policy and increased the use of safety alarms three-fold.

Richard said: "Looking after the safety of staff is important for every organisation. At Bovis Homes we want to make sure that our staff actually use the devices as part of their everyday working.

"Lone worker safety has to be part of the culture of an organisation to make sure it actually happens on the ground. So we go out of our way to train our frontline staff, but we also report back on lone worker safety at board level."

Peoplesafe, which has its headquarters in South Yorkshire, is one of the UK's leading providers of simple and lightweight equipment, monitoring services and safety training for lone workers.

It provides an NSI Gold accredited service, which is the highest possible industry recognition. The service is fully compliant with the British Standard for lone worker provision (8484). Its clients include a range of major retailers, housing associations, facilities management companies, charities and house builders.

Suzy Lamplugh Trust works to reduce the risk of violence and aggression through campaigning, education and support.

The charity was set up by Paul and Diana Lamplugh in memory of their daughter Suzy, a 25 year old estate agent, who disappeared in 1986 after she went to meet an unknown client in London. Her body was never found.

Topics:
Violence at work
Products and services
This content is paid for and not an endorsement from IOSH or IOSH magazine.