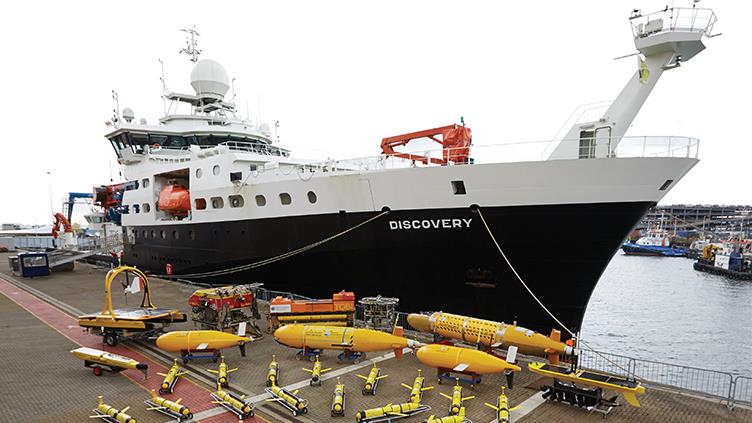 Helping soundproof the control room for a remotely operated underwater vehicle, auditing a Texas manufacturer of explorer launch and recovery systems, risk assessing a business event with more than 5,000 visitors. Ask Sultan Khan, centre safety adviser at the National Oceanography Centre (NOC) what has kept him in his post for the past 15 years and he can reel off a variety of recent tasks on top of his day-to-day duties that suggest the job never becomes humdrum.

Khan is NOC's most senior adviser on shoreside safety, supporting the scientists monitoring the composition and changes in the world's oceans. NOC is one of four centres managed by the National Environmental Research Council (NERC), along with the British Antarctic Survey, British Geological Survey (BGS) and the Centre of Ecology and Hydrology.

The main centre at the port of Southampton is home to around 3,000 people. Scientists, support staff, students and tenant organisations such as the Met Office, are housed in a six-storey quayside building, with double-height engineering workshops, and offices, classrooms and labs above. There is a satellite site on the Liverpool University campus. 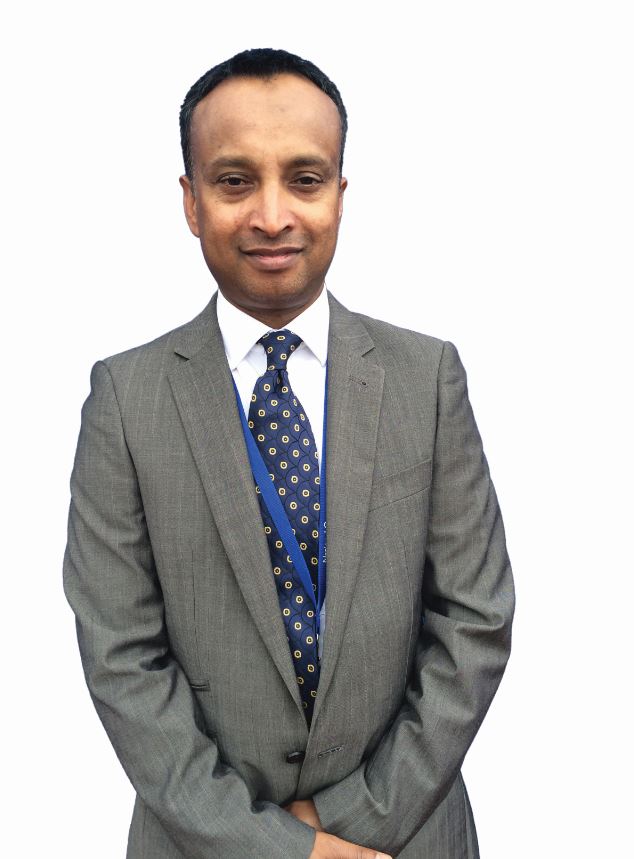 NOC's most obvious serious hazards: the chemicals used in its labs and the radioactive sources -- including a portable one for use on ship in a gamma density logger -- are also the best controlled. For the latter, Khan has the support of dedicated radiation protection advisers.

One of his principal concerns is equipment handling. Loading the centre's two research ships for their voyages and servicing their equipment involves moving some heavy plant. When we visit, a seven tonne cable reel that carries up to 6.5 km of power and data line for the Isis remotely-operated underwater vehicle is in the workshops for servicing.

"We have to worry about ships deploying things over the water's edge, cranes and forklifts, loads falling off," Khan says.

Shifting equipment such as the 3 m long autonomous submarines around the workshops is managed with a system of trolleys and hoists that carry items between and across the two floors.

On a smaller scale, Khan is looking for a handling aid to help lift the centre's national repository of thousands of seabed sediment core samples, each weighing 7 kg, many of which are stored in shelves above head height.

The vehicle movements and lifting operations take place on an open quayside only 27 m from NOC's office and laboratory complex housing 1,400 staff and, more significantly perhaps, almost the same number of students from the University of Southampton, who occupy parts of the centre.

"It's lovely by the water in hot weather and we had a problem with students wandering out," Khan says. "Students need a lot of supervision generally." The answer to the sunseeking intruder problem was an access-control system for the quayside, based on swipe cards, with a strictly enforced requirement to wear hi-vis clothing and safety shoes.

We aren't even in the management line; we sit outside it. Safety advisers are advisers purely

Apart from the research voyages, which are risk controlled by ocean-going safety advisers, NOC scientists make regular trips to study coastal waters in countries which other employers decree off-limits for security reasons.

NOC uses the services of consultancy firm Control Risks Group, which helps would-be travellers check whether their intended destination is high, medium or low risk. If it's low risk they have only to provide contact details to their group head; medium risk entails completing a travel risk assessment. "If it's high risk we may allow them to go," says Khan, "but it needs to be justified, with the executive director approving the journey."

Khan began his career in engineering in the 1990s: "I joined a company called HTEC as a production engineer writing programs for printed circuit boards for pick-and-place machines in a conveyor line. Three or four years into that work we were getting a lot of questions about health and safety from clients. The company looked at who had an eye for detail and said 'would you do this for a short while?'."

He decided to gain some formal grounding in the subject and took a NEBOSH general certificate. After four years HTEC asked him to move back into production work. "I thought 'no, I enjoy this, I want to pursue it'."

In 2001 he moved to what was then Southampton Oceanographic Centre, which put him through the NEBOSH diploma and the environmental diploma.

"It wasn't all plain sailing to begin with," he admits. "Coming from industry I was used to a situation where if I had a problem I wanted to solve it the same day. But in an environment like this people are at sea or on leave a lot of the time, so when you have an idea you want to share you can very rarely get hold of them."

He was also concerned by his relative status. "I did worry at the start thinking 'how am I going to influence all these professors and directors?' But you have to forget about all that and think 'I am here on a professional basis. You may be a professor in your field but I know my stuff too'."

Working with the scientific staff has sharpened his persuasive skills. "They are a clever bunch; if you give them one reason why they should do something they will give you ten why not."

He says the message he tries to convey is that working with him early on will allow them to develop better research proposals that are more likely to be accepted by NERC or the university. "That usually works," he says.

Khan stresses that his role as safety adviser, and that of the ten group safety advisers who deal with hazards in the functional groups, is just that: a counselling one. "We aren't even in the management line; we sit outside it," he says. "Safety advisers are advisers purely."

Safety and health is "owned" by the group heads to whom the group safety advisers report. Khan ensures the heads go through a two-and-a-half day training course on their responsibilities. The centre's directors have a shorter course lasting one and a half days.

Khan supports the group safety advisers and meets them all at least once a month to discuss problems and progress. Otherwise, his work involves managing issues that fall outside the groups' remits and digesting and translating policies from NERC or the University of Southampton into local procedures.

"You have to strip away all the jargon and write to them in plain English saying 'this is why it will benefit you'," he observes.

Implementation of centre-wide policies is preceded by consultation with the various sections, often at the weekly coffee mornings -- informal meetings in the directorates, to which he will be invited to explain proposals and take questions.

"There is a new road risk policy that we are trying to implement in January," he says. "So I will be booked in [to coffee mornings] in September to talk about that."

He has already consulted the groups, "but it's another chance for them to tell us how they feel about it".

Before his recruitment to the centre in 2001, OSH management was distant and NERC was not much involved, leaving arrangements to the University of Southampton's team. The change was triggered by a significant personal injury payout for a manual handling injury at the centre's Ocean Engineering Division. An employee was hurt lifting a 70 kg airgun receiver used to record seismic reflection data from the seabed. A subsequent NERC audit found NOC lacked "an all-encompassing safety and health system".

After his appointment by NOC to address the shortcomings, Khan acted as a link between the council and the university for several years before gaining the centre's agreement to appoint the ten group safety advisers.

Another NERC audit in 2008 gave the new safety system a clean bill of health. The most recent in 2015 found NOC's arrangements were "very acceptable, exemplary in some areas". For that year, the centre recorded 27 accidents and 78 non-injury incidents and near-misses. This year it is on track for even better results, with nine accidents and 42 incidents recorded to the end of July.

Khan and his part-time assistant schedule 30 internal audits of NOC's facilities each year. All the high-risk areas, such as the quayside and labs, are inspected twice a year, the others once. The group safety adviser responsible for an area receives an automatic notification when an audit is due and reminders until they complete it. They are expected to tackle any issues the audit flags for attention, such as display screen equipment assessments or updating risk assessments or overdue manual handling training. If they do not Khan is notified "and we name and shame them at our meetings".

You have to think 'I am here on a professional basis. You may be a professor but I know my stuff too'

He also includes any overdue actions in his monthly report for the NOC executive board. His ultimate sanction is the power to stop anyone without requisite training in skills such as sea survival from embarking on research voyages.

He enjoys brokering compromises between the interests of different groups at NOC, such as the scientists and the estates team.

"When we got ISO 14001 certification there was a question about where we put our recycling centre. Nobody wanted it on their doorstep," he recalls.

There were three possible locations near enough the building for staff to bring waste and with adequate access for collection vehicles. Though it wasn't a decision to be made on risk management grounds, Khan spoke to all the stakeholders and recommended a site to the board. "And people thought, 'well they listened to our concerns, that's the best we will get'."

Once a quarter the safety advisers from NERC's four research centres meet via videoconference with the council's central OSH adviser to share experience on shared issues such as Legionella management or control of contractors and lessons learned from accidents.

"We also audit each other," says Khan. "I've just come back from auditing BGS, and they audited our Liverpool site in May."

This process gives another opportunity, on top of the quarterly meetings, for him to learn from other centres.

"I was looking at how BGS manage their laboratories," he says. "We have had issues where contractors were going into labs where they shouldn't have, when there was building work going on and people have opened doors to let them in. BGS has a stricter system with colour coding. Green means contractors are allowed in the area; amber means they need some sort of paperwork; red means definitely not and they need someone to go with them. That's something we are likely to introduce here."

Conversely, a practice the other centres are adopting from NOC is that of posting cards on lab entrance doors with details of who is in charge of the lab and a summary of its hazards.

"Something I could be overlooking because I've been here 15 years is apparent to someone who comes with a fresh pair of eyes," he says. "We are fortunate in our working relationships." 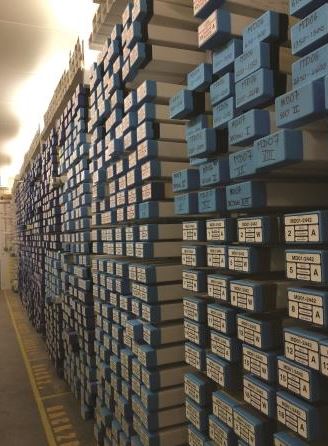 The next step for NOC, says Khan, is to gain accreditation to the new ISO 45001 OSH management systems standard when it is eventually published next year. Two of the other NERC centres have achieved certification to ISO 45001's precursor BS OHSAS 18001: "Our remit is to catch up," says Khan. At present safety systems are based on the Health and Safety Executive's HSG65 model, "but we'd like to have an external company come in and say, 'fine, what you are doing is all right'." He is already working to redraft the 28 OSH policies in a format that is more compatible with the new standard.

Apart from the special projects, such as the open days, Khan says there is enough variety and surprises in his work to keep him satisfied.

"There are times when I think 'we do that here?'" he says. "But I go and talk to the experts and to [my peers at] other NERC centres and ask 'how do you deal with that?'"