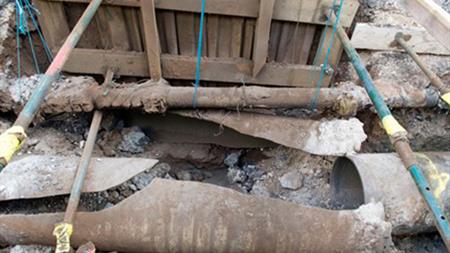 As we reported last month, three National Grid Gas workers and two employees from RS Services were deployed to Ashby Road, Scunthorpe to stop a gas leak. The fault was in the location of a previous repair on the pipe that first needed to be removed.

On 24 June 2014 the workers were in an excavation removing the existing repair on the leaking pipe. As this went on the volume of leaking gas increased and the workers put on breathing apparatus that included a full face-mask.

The escaping gas continued to build up until the pipeline burst. It trapped 36-year-old RS Services engineer Ryan Spencer's leg between that and another pipe and broke his femur.

"It went from being a relatively minor, controlled situation to being an uncontrolled situation," Health and Safety Executive (HSE) inspector Ian Redshaw told IOSH Magazine. "It was a full bar rupture of a 24 inch gas main that was at 2bar operating pressure."

The rupture created what Redshaw called "a very large release of gas" that threw up a lot of dust and debris within the confined underground space and hampered the Humberside Fire and Rescue Service team that freed Spencer.

"The crew had essentially zero visibility -¦ so that meant they kind of had to do things by touch rather than being able to see what was happening. That made it very difficult for them to assess how Ryan was trapped and how they could go about releasing him," said Redshaw. "Normally they would have used some form of cutting device to release Ryan's leg but that would have possibly created a spark and therefore a source of ignition, limiting their options in terms of how they could respond to him."

Spencer was trapped for just over an hour. The rescue team used airbags to separate the two pipes and free his leg. The gas continued to leak for another three hours and local residents were evacuated from their homes due to the risk of explosion.

There were several failures by National Grid Gas that led to the incident. Firstly, it did not produce non-routine operational procedures. "That should have been in place for the work that was being undertaken," said Redshaw, "and would likely have resulted in a reduction in the pressure in the main prior to work starting. It would have significantly reduced the risk of the rupture but if an escape did occur it would have reduced the amount of gas escaping."

Secondly, the supervisor who was responsible for the job had leave booked on the day of the work and a temporary supervisor was arranged. However, the handover of documents and information from the supervisor to the temp was insufficient and the risks could not be properly managed.

Thirdly, National Grid Gas did not communicate with the contractor (RS Services) about exactly how the repair work was going to be carried out. "There was confusion among workers about whether the work would involve modifying the existing repair or fully removing it and then subsequently putting on a new repair to sort the leak out," said Redshaw. "There was no clear line of communication to the contractor so it was beyond any reasonable doubt exactly what was going to be undertaken."

National Grid Gas was sentenced at Sheffield Crown Court on 25 January where it was fined £1m and ordered to pay £26,296 in costs for breaching Section 3(1) of the Health and Safety at Work Act.

Redshaw said: "He [the judge] talked about the risks being real and substantial and he also considered that the failings weren't just down to the individuals undertaking the work - supervisory and management levels were aware of the works. He also said that it was fortuitous that there were no fatalities. There were risks to the emergency services, members of the public and the contractor."

The HSE did not take a prosecution against RS Services.