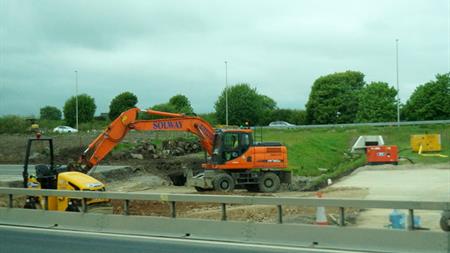 Lewis Macdonald was responding to Nicola Sturgeon's statement at first minister's questions on 7 June that responsibility for health and safety on site "rests with the contractor".

Macdonald said the government as client for the project should take a hands-on, proactive approach to health and safety through its agencies such as Transport Scotland, rather than leave it to the contractors, Aberdeen Roads.

Macdonald's intervention came after Sturgeon had responded to criticism of the Scottish government's handling of safety concerns on the £745m project to build a 45 km bypass, which came to light following Construction News' investigation in to the project's safety record since 2015.

Transport Scotland, the project's client, reported 23 accidents in 2015 when it published its report in March 2018. However, this contrasted starkly with the figures in the safety documents presented to Construction News, which recorded 115 safety incidents.

The internal reports also showed accidents had rocketed by 225% during the first year. Average accidents per month, which stood at 5.2 between February and July 2015, shot up to 16.8 between August and December, the publication reported.

Scottish Labour leader Richard Leonard has called on Sturgeon's government to order a public inquiry into the management of safety on the Aberdeen Western Peripheral Route (AWPR) after internal safety records suggested that "accidents on the project have been chronically under-reported".

Scotland's first minister said: "There is a dispute by Transport Scotland about the way in which some of those figures have been presented, and I would be happy to ask Transport Scotland to contact Lewis Macdonald to discuss those concerns in more detail.

"That said, we take all allegations seriously, and we have raised the matter with the contractor."

Leonard, who said the allegations should be investigated as a matter of urgency by the Scottish government, said: "This is supposed to be a flagship project-¦ and so should be founded on a gold standard of health and safety as well as the terms and conditions of workers in the project."

Challenged on the internal reports' findings on 7 June, Sturgeon told MSPs: "We expect any contractor on any project that we're responsible for to work to the highest standards of health and safety and that applies to the AWPR", adding, "It's important to stress that responsibility of health and safety on site rests with the contractor."

Sturgeon said the Health and Safety Executive had visited the bypass in April 2017 and "was content with the processes in place". She added that the government would continue to discuss any concerns directly with Aberdeen Roads.

However, after first minister's questions on 7 June, Macdonald responded: "It's deeply concerning to learn that corners were being cut and safety being compromised on the AWPR project, due to workers being under intense pressure to meet the completion date. Speed should never come before safety."

Macdonald urged the Scottish government to take a lead on investigating incidents, adding: "If safety incidents aren't properly reported, then how can they know the scale of the problem and how can they ensure that lessons are learned, and mechanisms put in place to prevent further incidents."

The Scottish government had tasked Aberdeen Roads, a joint venture between Carillion, Galliford Try and Balfour Beatty, with delivering the project. However, the collapse of Carillion, which went into liquidation in January 2018, left the two remaining members to shoulder the work. Completion on the project is expected later this year.